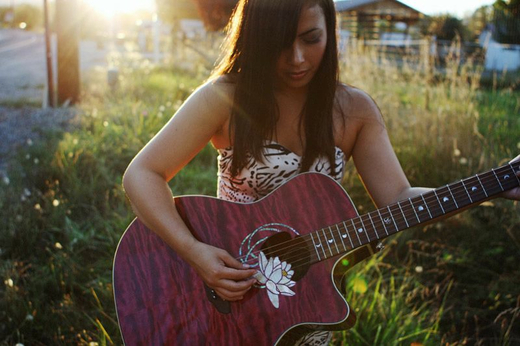 Victoria grew up on the Big Island of Hawaii. Her love of music at the young age of 5 when she would sing the lion king soundtrack to an audience of her stuffed animals, and cruise around on her bicycle with "Dream Weaver" bumping through her original walkman headphones

At the age of seven she got the opportunity to see one of the greatest Hawaiian musicians of all time, Israel Kamakawiwo'ole. She sat upon her daddy’s shoulders as she watched him sing and play his ukulele to the famous “Somewhere over the rainbow, what a wonderful world.” From that moment on she knew she wanted to be a musician. She asked for an ukulele and soon after she was strumming chords & singing island songs

When Victoria was 12, her family moved from the Big Island to Southern Oregon. From there she taught herself to play guitar at age 15. It wasn't long until she was performing in local venues and winning talent shows & competitions.

After graduating in 2007 with a class composed of 98 students, Victoria went on to pursue a bachelors degree in Psychology while minoring in music at the University of Oregon. She spent the better part of her two years in attendance writing songs, performing on campus, and later playing shows with an 8 piece island band in venues all over Eugene including the Willamette Valley Music Festival.

Victoria recorded her first single "Even When You're Gone" and released it for download on itunes in 2009, from there she decided to take her music to the next level.

Currently she is pursuing a degree in Audio Production at the Art Institute of Seattle. She spends her free time painting, distance running, songwriting & making waves in the music industry. Victoria has been known to bring a smile to your face, weather it be a crowded cafe audience or just a brief introduction followed by small talk. Her music is a breath of fresh air to anyone who enjoys a good acoustic sound spiked with Island swag and smooth sailing indie pop. Victoria effortlessly makes every day a passionate plunge toward success, and at the very least, she is quite possibly one of the happiest artists in the Emerald City.