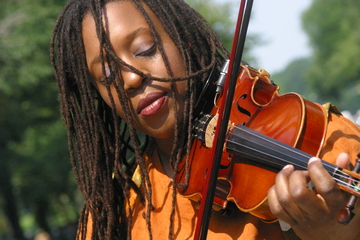 Fiona’s Cousin: (T. Hanna) I wrote this thinking of two sea crossings. The first crossing: the Irish and Scots during the potato famine, bringing their hope and dreams to start over in America and crossing in The second crossing is that of the Middle Passage, Africans who were stuffed in the holds of ships like lumber chained, with no hope of a better life and still hearing the sounds of the drums they left behind. The interelatedness of the two journeys echoes in my blood. I am 1/16 Scottish.
Uploaded: February 5, 2008
Duration: 5m 3s

How original! A story captured with only music!
by Original Music Lover on December 25, 2008 at 5:17 PM EDT