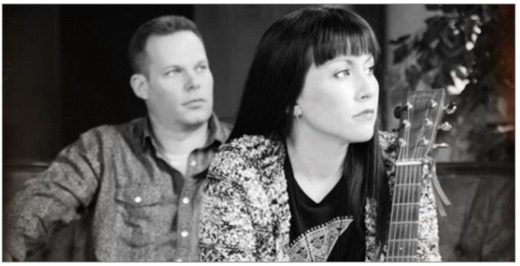 THE RAFTERS are Dave Fitzgibbons and Miki Bryan a husband and wife duo. Their music focuses on melody and lyrics over a blend of pop/folk influences. Their songs are snap shots into their lives, their loves, and those things which make us all human.

Meeting in college at UMASS Lowell some 21 years ago, they had a few things to take care of before coming together musically. Date for 7 years, get married (15 years and going…), buy a house, have a kid, start a band, have more kids… They love music and still like CDs and the artwork more than MP3s. If albums were around that would be even better. They have gone to 100’s of concerts together, from Barry Manilow to Lori McKenna, the Neighborhoods to Bon Jovi, Ani, Wheat, U2, friends shows, and of course the Indigo Girls (74+ shows alone!).


They have opened for such National acts as The Laws, Michelle Malone and Lori Mckenna. The Rafters played the Main Stage at the Wachusett Valley Folk Festival headlined by Gandalf Murphy and John Gorka. Acoustic for Autism added “Every Mile” to the A4A compilation. Other contributing artists included Chris Trapper (Push Stars), Kris Delmhorst and Elizabeth Lorrey. They have played the Lowell Folk Fesitval, Headlined the prestigious Bull Run in Shirley, MA, and the Wachusett Music series. Had the honor of kicking off Boston’s Pride 2011. Most recently The Rafters were chosen as the featured music artist on the NECN Morning show sound track segment for the week of March 13th 2012. Summer 2012 they shared the mainstage at the Wachusett Valley Folk Festival headlined by Joan Osborne and John Gorka. On September 14th 2013 they played their biggest show to date, playing mainstage once again at the Wachusett Valley Music Festival, this year headlined by the one and only AMY RAY of the Indigo Girls! October 2013 they travel to CT to open for Mieka Pauley.

They released a CD in 2007 “The Rafters” working with famed producer Lorne Entress and in August of 2009 completed their second CD “With the Sun” which was mastered by Grammy award winning engineer Mark Donahue. They record their songs in the basement between the noise of the furnace, running water, and the kids…On December 1, 2012 released their third CD "Breathing Room" to a sold out crowd at the Shirley Town Hall. The Rafters spent time touring promoting their 4th studio album, this time working with famed producer Crit Harmon! The Rafters were selected as a Falcon Ridge Emerging Artist for 2016 and were asked to represent Massachusetts at the 2016 Big E Fall Festival. With new songs and new energy they are excited to head into the studio for their 5th album as the leaves begin to Fall. More details coming soon!