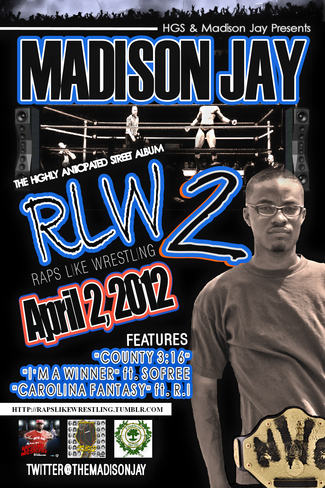 With lyrics like: “Got those elbows flyin’ like I’m Macho Man/If you’re not a fan, you don’t understand,” it’s easy to see where Madison Jay gets his lyrical inspiration.

Born Dionté Gambrell, Madison Jay, started his hip-hop career in 2002, while in high school, as part of a group called HeadHuntaz/H-Gang. In 2007, he beganwork on his solo endeavors.

In 2010, Madison Jay released the mix tape Raps Like Wrestling, based purely on his love of wrestling. The goal of creating this wrestling-based music was simply just a mission to merge the two genres – wrestling and hip-hop – and show the similarities between them both.

“I honestly was tired of rapping about the same topics and ideas every other rapper was talking about,” he says about first creating Raps Like Wrestling. ”I just decided to talk about something I could REALLY discuss and rap about better than most: WRESTLING!”

Before the debut of Raps Like Wrestling 2 (coming 2012) fans can look forward to Leak-A-Mania on Nov. 11. Featured on the prelude are tracks called “Best in the World,” “4 Horsemen,” “Red and Yellow,” and “Tito Santana.”

Madison Jay’s list of musical influences includes Nas, Wu-Tang Clan and Cormega. Also in that list is the WWE and WCW music directors.

Looking at tracks from both Raps Like Wrestling and Raps Like Wrestling 2, it’s quite evident that Madison Jay has been a long-time wrestling fan. Bret “Hitman” Hart, Stone Cold Steve Austin, Chris Benoit, Rob Van Dam, and The Rock are some of his all-time favorite wrestlers.

“[...] the first thing you hear is [a wrestler's] music. The music and what it represents when a wrestler hits that stage is like when an artist is just hitting their stage the instant their music drops. The feeling between the two is almost euphoric!”

As most other wrestling fans, Madison Jay has his gripes about some things going on in wrestling. He says, “As a fan I wouldn’t change anything because it would take out the value of what attracted me to wrestling in the first place, but as a “critic,” I would change a laundry list of things.”

“I use to dislike John Cena’s character once he reached “Hogan Status” but I’ve grown to appreciate him for what he is,” he says about John Cena. He adds, “CM Punk is one of the hottest things going right now in wrestling and he is everything I would wanna be as a rapper: outspoken, quick-witted, and the best in the world today!” 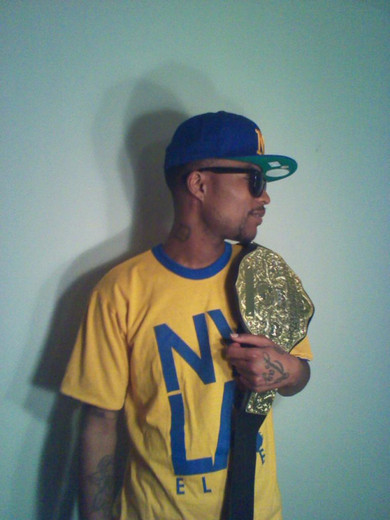