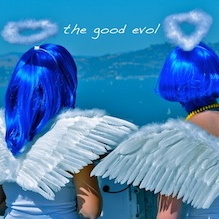 Songwriting is a major focus of The Good Evol, earning them awards from such industry giants as VH1, Billboard and the John Lennon Song Contest. Billboard describes lead singer, Natalia Bortolotti, as "a master of songcraft with the vocal chops to match." Their songs are regularly featured in film and television, including FOX, ABC, CBS, NBC, MTV, VH1, CW and WB networks.

The Good Evol is on the radio and on the road (including their latest opening stint for Weezer), so keep an ear out for songs from their debut album, "Butterfly Crush," on commercial, satellite, college, internet, and podcast radio, and keep an eye out for The Good Evol coming to your town!

Add some tunes to your iPod! The new album, "Butterfly Crush," is now available from iTunes, Amazon, CDBaby and all your favorite digital music sites! :)

The Good Evol continues to impress both critics and fans, earning them major awards and recognition, and the most loyal fans in the world. They are constantly touring, including showcasing at SXSW, NXNE, NEMO, Atlantis, NAMM and CMJ.