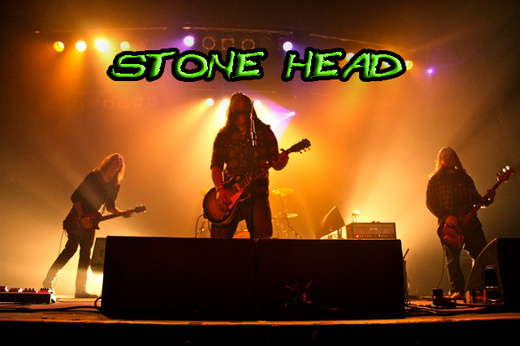 We found each other on a music trip to Boston in our freshman year of high school. You could say that we were quite different from the lot as Andy was the only fourteen year old badass pirate with a mustache and chest-length hair and I was the only lanky bastard who was planning on pursuing classical oboe study at the collegiate level while also maintaining an intense and dedicated Judas Priest phase. We started out writing a bunch of angsty rock ‘n’ roll stuff in my basement and over the years we have come to grow together as friends, musicians and performers into the Stone Head that is alive and kicking today. We’ve got a real hard hitting sound, wicked vocals, a passionate live presence and an edge on musicality that we think puts us a step ahead of the rest.
So far in our musical careers we have gigged all across New Jersey opening for everything from strippers to famous hair metal bands, we’ve played in Brooklyn and we’ve played numerous shows in Philadelphia including a headlining spot at the famous Trocadero theater. We released our first full-length, self-titled album in June 2012 and we’re looking to get back into the action with our newest, professionally recorded EP to be released in February 2013.
Most importantly, we take our music and ourselves pretty seriously, that’s sure as hell. However, it’s going to take a lot more than that to get everyone else in the world on board and with that in mind, I guess you could say that we’ve got ourselves a five-year plan.