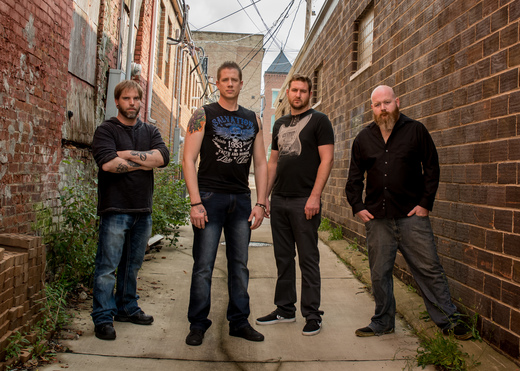 Soundstill is a 4-piece hard band out of Okoboji, Iowa. Band members include- Chris Adams (vocals), Josh Cother (guitar/bass), Terry Justice (bass/keys/guitar) and Tyler Hoekstra (drums).  They are often compared to Otherwise and Korn, mostly from the style of vocals. They are greatly influenced by Deftones, Staind, Periphery, Stone Sour, Mastadon and Demon Hunter for music style.  Soundstill is a band that harnesses raw emotion and delivers it back to rock and metal fans in a way that they can easily relate.

Originally formed in 2006 by Chris Adams and 5th member Dana Evaro, later recruiting Josh, Terry, and Tyler to begin work on the first LP album, Leading The Fallen, released in 2009.  The 13 song album was created based on a story line about a town tortured by evil and how it was overcome. In 2010, Soundstill began work on the second album, American Disease.  This album completes a chapter about the ongoing story of life, the social issues through which people struggle on a daily basis, and the triumphs resulting from fighting the American disease.  The album was originally planned to be a LP but later released late 2011 as a 4 song EP due to the departure of guitarist Dana Evaro.  Both albums were recorded and produced by award winning- Mike Dresch of Cathouse Studio in Sioux Falls, SD (The Spill Canvas, Nodes Of Ranvier, Hands and War Of Ages).  Soundstill is set to release their self-produced 3rd album “Before The Sunset Ends” November 2014.

Hard work has given them the opportunity to share the stage with bands such as Papa Roach, Sick Puppies, Janus, Bobaflex, Saving Abel, Red Line Chemistry and more as well as giving them exposure on commercial and internet radio.  They have devoted time and money playing for fundraisers and have created and played in many local events.  Although now only a 4 piece, Soundstill plans to keep moving forward with new material for the 3rd album and scheduling shows.  With a more involved writing style for the next album, along with Terry and Josh trading back and forth guitar and bass, you are going to see and hear the true potential that defines Soundstill.  "We fully intend on making this album one you will never forget", Chris says. With a new look and new album, Soundstill is looking forward to showing the world what they have to offer!