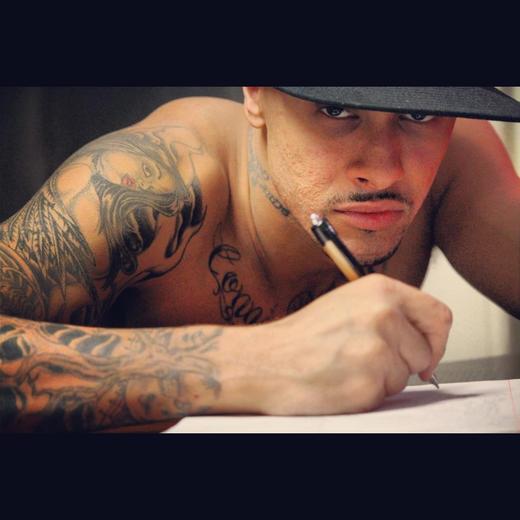 Joshua “Rated R” Candelario, South Bronx native rapper, was born on December 26th to Constance Candelario and Tom Copeland. Constance, a 16 year old girl was left to single-handedly raise Joshua when his father left, shortly after his birth. Being a young mother and single, Constance gave into the way of the streets. She picked up on a drug habit that would determine the outcome of Joshuaís childhood and influence his outlook on life as a young adult. Constance was losing the battle with her drug abuse and being able to raise Joshua in a stable environment. It was then that Joshuaís grand mother, Esther, stepped in and played a significant role in his upbringing throughout his childhood years

“I remember when my mother used to take me to different drug spots. She would have me wait outside while she bought drugs, did drugs, who knows. I knew deep down what was going on and something was wrong. She would always lie to me when it came down to her abuse. I’ll never forget this one time she left me outside while she went into a building and I seen this man pass off crack to her, I was about ten years old. I went crying to my family and since that day, life hasn’t been the same.

Joshua’s grandmother wasnít only raising him. She was also raising his two sisters and one of four brothers, all younger. School was never one of Joshuaís stronger points, given his situation and constantly facing a struggle in himself with emotions from what he had been a part of and witnessed at such a young age. Upon dropping out in the 8th grade, without school, Joshua became influenced in the way of the streets. It wasn’t long before he was getting mixed up with the law. As a known person to authorities, this was the beginning of ìRated Rî. On his 17th birthday, he was sent away for three years from a handful of incidents. With three long years to think about life, it was apparent that music was his only choice

“Music is the only sustainable thing in my life, it’s a part of me and all I do and I canít imagine not investing in my craft. I never was really good with expressing my feelings but music was a way out, the only way I know how.

His first free style was with Milli, the first person to show Rated R that rapping was more than just a hobby

“And since then the rest has been history in the making.

Rated R decided there were too many distractions in the Bronx. Following his instinct to focus more seriously on his craft, he needed a change. He made the decision to re-locate to Upstate NY, where his aunt currently resides and is a natural support system, away from his core family. After two years in upstate New York, Constance Candelario passed away. In a way, it has given Rated R motivation and revelation to just what needed to happen in his career, his plan for his family and his own personal future. He didn’t want to just make it for himself, he wanted to make it for his family and put his story out there to, in some way, help and inspire others. He didn’t just lose his mother, his two sisters and four brothers lost their mother as well. Rated Rís top priority is to take his family out of the hood and put his brothers and sisters through college

Rated R has since dropped several mix tapes; “BRONX MOST WANTED” hosted by Dj Sure Shot, “NEW YORK STATE OF MIND” hosted by Dj Super Star Jay, and “MOOD SWINGS” hosted by Dj Big Mike. He has worked with numerous producers from around the U.S and international. He has opened for several major recording artists such as Joe Budden, Jim Jones, Uncle Murda, Red Cafe and Slaughterhouse. He has also been featured on several websites including Worldstarhiphop.com, hiphopgame.com, vladtv.com, allhiphop.com, wegoinin.com, and thisis50.com. He’s held features in several magazines such as Twenty4seven and Protege magazine

Currently Rated R is working on his first EP “Miss Me When I’m Gone.” The drop date is to be announced. Many colleagues and professionals of the industry are anticipating a great turn out in the current direction Rated R has taken in his career. With his experience and growth personally and professionally, he is already making his mark in the game with nothing short of excellence

“For me, this is more than music. Itís my life, my way of life”.