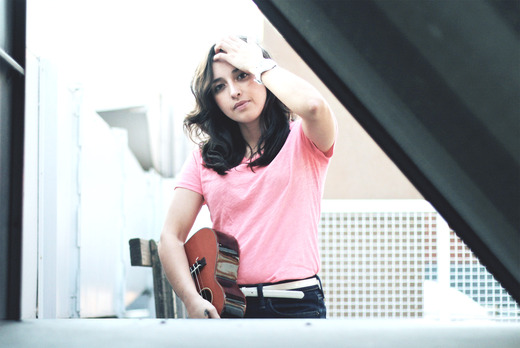 Eastborough a.k.a singer/songwriter Stefani Guzman swims in and out of dream-pop, indie rock and pluck-rhythmic ukulele with her debut full length CD "Your Place".

Funded in part by The City of Ottawa's Arts Grant for Popular Music, "Your Place" is the result of a new partnership with Toronto producer Adam King (Jill Barber, Jully Black, the Good Lovelies) and has since charted nationally breaking into the top 10 in St.Johns, Ottawa, Sydney, St.Catherines, Halifax and Guelph as well as garnering a spot on Earshot's top 200.

Along with a stellar live band which includes Joshua Parrett (guitar), Mike Sbrochhi (keys), and Sam MacKenzie (bass), Eastborough charts new territory and has enjoyed increased exposure thanks to sharing the stage with acts such as Spiral Beach, Gentleman Reg, Rebecca Higgs, with performances at the Drake Hotel, Toronto's North By Northeast (NXNE), Canadian Music Week and Indie Week festivals along with television and upcoming film placements including being selected out of 1200 bands to be included in Rob Burnett's (Exec. Producer of The Late Show w/ David Letterman) new film "We Made This Movie"!

Eastborough is currently gearing up for a video release party for the dancey track "Soft Step" filmed by one of Canadas top female D.O.P's Sarah Moffatt and directed by actor Jefferson Guzman. The track has also been released in partnership with TuneCore as part of NXNE 2012's "Best of the Fest" compilation on Amazon.com.