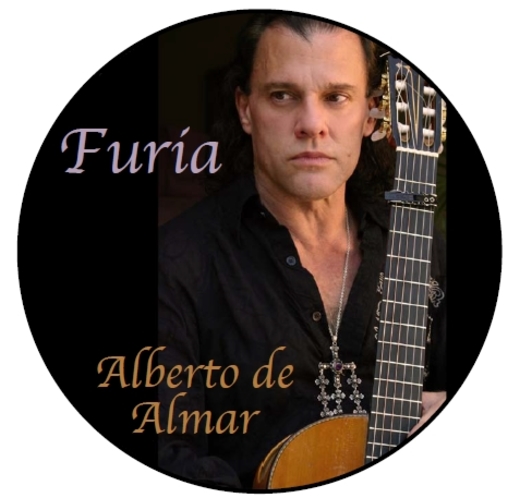 In N. San Diego County and recently traveled in Spain , Morocco, Switzerland and other places in Europe.

Looking for a good and safe place, away from the bad ET's's ,and service to self humans,aliens and inter-dimensionals.

I DJ and accompany the tracks with live electric synth guitar, and tour with groups upon request.

Alberto de Almar's journey into the world of Flamenco and World Music and culture had its auspicious beginning in Miami, Florida. His Aunt Hañia Rodriquez, who had recently returned from Spain, gave Alberto's brother a guitar which soon found its way into Alberto's precocious eleven year old hands. His prodigious talent was immediately evident. From that moment onward, Alberto and the guitar were inseparable. To imagine Alberto without a guitar in his hands would be to imagine the universe without a sun. After mastering rock, jazz and classical guitar styles, Alberto fronted opening acts for headliners The Allman Bros., The Grateful Dead, Edgar & Johnny Winter, Sly and The Family Stone, The Blues Image, NRBQ and others. In addition to performing,

Alberto taught classical and jazz guitar and music theory at Dade Community College and at the University of Florida while obtaining a degree in pharmacology. Alberto's reputation as a young, versatile and innovative guitarist caught the attention of legendary music genius, Frank Zappa, who invited Alberto to Los Angeles where he worked with recording artists as diverse as Terry Bozzio, Don Preston, Freddie Hubbard, Jaco Pastorius, Minnie Ripperton and several other prominent musicians on various recordings.

During his stay in Los Angeles, Alberto was introduced to the emotionally charged world of Flamenco music by his cousin, Jorge Strunz of Strunz and Farah. While he continued to work in the eclectic Los Angeles rock scene, Alberto diligently pursued his passion for Flamenco and created his own unique style integrating contemporary characteristics of rock and jazz with traditional flamenco.

Fueled by his passion for Flamenco, Alberto traveled to Spain where he was introduced to Paco de Lucia, considered to be the best contemporary Flamenco guitarist in the world. Alberto stayed in Spain and worked with Paco transcribing and copyrighting Paco's original compositions including the guitar arrangements on Chick Corea's album "Touchstone." Under Paco's tutelage, Alberto's guitar talents flourished , as did his reputation as a prolific transcriber and Alberto found himself transcribing for other renowned Flamenco artists such as guitarists Pepe de Lucia and Enrique del Melchor and vocalist Camaron de la Isla.

At the invitation of guitar legend Manolo Sanlucar, Alberto spent several years touring and performing throughout Spain during which he performed on three occasions for the King and Queen of Spain. He recorded two albums with Manolo, "Al Viento" and "Ven Y Sigeme," which was commissioned by the Spanish government as a national dedication to Pope John Paul II. Alberto and Manolo were also featured in the acclaimed "La Guitarra" television series documenting the lives of Spain's Flamenco guitar legends. In addition to his work with Manolo, Alberto recorded with Enrique de Melchor. He toured with Flamenco singer Enrique Morente and guitarist Paco Cortez, performing "El Mito De Edipo Rey", a Flamenco version of Oedipus Rex which gained national attention for its unorthodox performances in many of Spain's famous Roman ruins.

He also performed with the orchestra in the national production of "Evita" in Madrid,and later returned to the U.S. where he continued performing, recording and touring as a both a solo artist and with various groups. He taught a series of Flamenco guitar workshops at the acclaimed Guitar Institute of Technology/MIT to which he invited some of the best contemporary Flamenco guitar talent from Spain – Pepe Habichuela, Rafael Riqueni, Javier Ruibal, Jose Miguel Carmona ,and Agust;n Carbonell "Bola."

He composed the film score for the Sidney Sheldon mini-series "The Sands Of Time." Alberto has also performed his original music on screen in such notable films as the Spike Lee production "Love and Basketball." He has performed at various events, benefits and private engagements such as The Spirit Awards (Independent Film Project), the U.S. Olympic Committee, the Gypsy Kings (at their post concert parties) and an intimate concert with Rafael Riqueni for President Ronald Reagan and First Lady Nancy Reagan.

Alberto's unique Flamenco fusion flavor can be heard gracing the recordings of numerous recording artists including Julio Iglesias, Charo, Doug Cameron (with whom he co-wrote the hauntingly beautiful "La Violeta"), the world music group Furia (with Javier Ruibal and Zakir Hussain), Prince Diabate (master kora musician and vocalist from Guinea), Cheb Khaleb (renowned Algerian musician/singer) and the cutting edge contemporary flamenco rock band, Los Crucificados (with Randy Castillo, Carmine Rojas and Django Porter) and with Alicia Keys on her remix single called "A Woman's Worth" that Alicia performed at the Grammy Awards with Spain's top flamenco dancer Joaquin Cortez. In 2003, Alberto began touring with renowed contemporary jazz pianist, Keiko Matsui. He performed and recorded with Keiko on her hit CD's, "The Ring" & "The White Owl" and is featured on the DVD "Live In Tokyo."

Alberto performs both as a solo artist and with other international recording artists. He also continues to work on a variety of projects, including various CD's. He has released 5 CD's: The spirited FURIA, the rock/metal infused BENT MARBLE , the ethereal and sensual ALMA PURA on which he collaborated with international music producer and composer, Claudio Collino and lately  recorded "ELECTROMAN" ,a psycho eleoctronic work of great complexity using his own new program , The ultimate riff generator ,"Albonimsky musc pattern generator ", or also called Alberto's music pattern generator , available , inquire by phone  at 505 9198164.

His newest album," La Furia del Toro on Fervor Records,is being used for film scores..Alberto's music is available at cdbaby.com. and here at ourstage.com..

To see songs, and videos listed on this site look under My Stuff on left  and click songs,Expand by clicking " expand all",to see the videos.