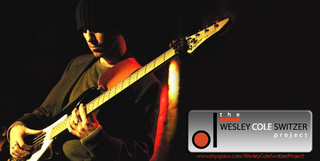 Check out my newest project at;
http://www.Cole-Collective.com

Wesley Cole Switzer is a bassist, producer and audio engineer. Wesley started his formal music training after receiving a B.E.S.T Scholarship from Berklee College of Music in Boston. At Berklee he studied with greats such as Matthew Garrison of the Herbie Hancock Band, and Daniel Morris. Privately, Switzer also studied with Anthony Wellington of the Victor Wooten Band.

Currently, Switzer is an endorsed artist with Eden Electronics, Dean Markley Strings, and Moog Electronics and resides in Southern California. Touring and recording with a variety of artists, Wesley Cole Switzer also performs with his own funk/jazz/soul group, which often features various guest artists from the area and around the world including artists from Japan, Sweden and England.

Switzer performs roughly 200 dates per year throughout southern California, Boston, and the rest of the nation.

A few groups and artists Switzer has had the privilage to work and or perform with include:

Cole DeGenova and the Peoples Republic