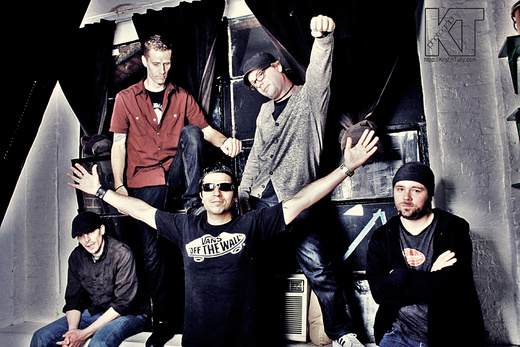 Victor Made A Time Machine

About Victor Made A Time Machine

An explosive driven rock quintet hailing from the NYC area, Victor Made a Time Machine has successfully made a musical zygote from a rock n roll egg and an alternative rock sperm cell- proving that it is possible to create catchy rock abound with lyrical depth. Their edgy sound combined with their energy filled live performance is infectious and leaves the crowd wanting more. It’s a little bit of hard rock and a little bit of alternative mixed in with a lot of awesome and it sure tastes good!!!

VMATM was formed in of 2008 and has been creating a strong buzz in the NYC rock scene for the past 2 years as one of the most notable bands to break through. The tight-knit, rock solid lineup includes Ray Mazza on vocals and rhythm guitar, Vinny Doucette on bass, Craig Otto on drums, Dorian Wolfe on guitar and back-up vocals and Chris Hovanek on keyboard and guitar. VMATM is a determined, hard working independent alt rock band who will always earn and show respect within the industry and push to get noticed on a national level.

The boys are hard at work on the proverbial road and are moving forward with new music, and an adjusted attitude. Having just recorded and mixed their debut LP at Killingsworth Studios in L.A. Produced and mastered by Tomas Costanza, the album is already generating a buzz throughout the independent circuit with Ray Mazza's bubbly lines and clean strumming to produce an effort bursting at the seams. It's just a matter of time before the rest of the nation is exposed to the VMATM experience.