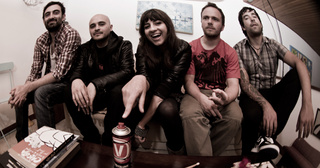 About V for Volume

V for Volume was created by accident, such as many things in life. The false illusion of control that surrounds everyone's life disappeared and suddenly the only thing happening was five friends making music influenced by different genres and inspired by the common taste in movies, books and pop culture. All of them are experienced musicians and true fans of music in all forms.

The band developed a very melodic yet powerful sound. Ranging from the harshness of rock music to the eloquence and catchiness of pop, the music has been well received not only by the music industry and critics but demanded by general audience and fans from all around the world. This has led V for Volume to massive exposure, radio and TV broadcast, amazing live performances and being in top of charts in their homecountry and on MTV Latinamerica with their first single video-clip CHEAP UNIVERSE.

PROVIDENCE, the debut album has 11 tracks and the acoustic version of CHEAP UNIVERSE (the first single), was produced, recorded and mixed by Mateo Camargo from the band MADINA LAKE (USA). His vision and experience contributed on the whole process and his approach was key in the development of a world-class signature sound.

After the release of PROVIDENCE, V for Volume has landed important spots such as being exclusively invited to Rock al Parque 2010, being chosen by PLACEBO (UK) to open for them in Colombia, sharing the stage with GREEN DAY, THE BRAVERY, COBRA STARSHIP and playing live in the SHOCK Awards 2010 (The biggest alternative culture/music awards in Colombia with international media coverage).

Quote: "Their music is universal, and the lyrics are heartfelt. Maria is a rising star. Watch out for this rising star in 2010!" David Bendeth, Producer (Madina Lake, Paramore, Papa roach, Carl Cox)