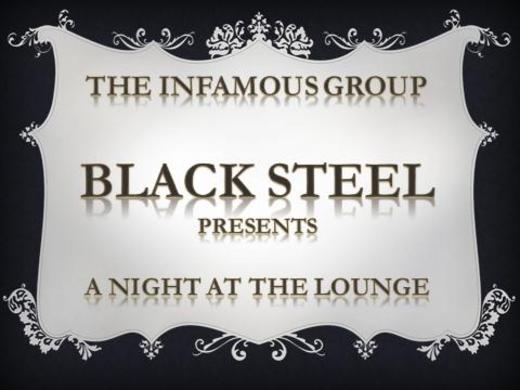 BLACK STEEL
“The Infamous Group Black Steel aka The Gentlemen of Funk” is an R&B/Hip-Hop/Jazz and Funk band from Goldsboro, North Carolina with recording studios in Raleigh, N.C. Black Steel was founded in 1994 by Terrell L. Hamilton (Producer, Keyboardist, Composer, and Performer) & Kelvin L. Raiford (Producer, Writer, Arranger, Guitarist, and Performer). Both Artist have strong gospel roots with other influences including a vast array of artist such as Joe Sample, Pete Rock, Stanley Clarke, George Duke, The Time, Prince, Parliament/Funkadelic, Cameo, Earth, Wind & Fire, Steely Dan, Chicago, Bootsy Collins, Sting, Heat Wave, Bill Withers, Najee, Boney James, Michael Franks, Marvin Gaye,  Boogie Down Productions, Public Enemy, Dr. Dre, Grover Washington Jr., The Yellow Jackets, Bob Marley, Steele Pulse, Alex Bugnon, Michael Jackson, Ronny Jordan, Bob James, Teddy Riley and A Tribe Called Quest.
Black Steels first project after several years off was titled “The Ship Has Landed” which consisted of spoken word, smooth grooves and rock guitar. The project consisted of six new self-produced songs. The vocal arrangements on all songs are freestyles. They are all made up on the spot while recording. The first single “Fly Away” contains a hypnotic melody and a smooth rhythm that seems to take listeners on a smooth journey through sound. The second single “Call on Me” featured up and coming rap artist “Reeph Manning” from Black Order and delivers a smooth two piece on the chin of R & B. The offering was a tune up for the next project.
Now, The Infamous Group Black Steel has a new Album: “A Night at the Lounge”. The project contains 12 self-produced, written and arranged songs that provide a little something for all music lovers.The first single “Ambrosia” is a climatic groove driven by a funky bass line  Black Steel sets the stage for a unique listen experience as they invite you for a night out at the Lounge aka The Palladium. The album takes you through an evening were you will enjoy smooth grooves as well as spoken word poetry that is sure to warm the soul. We take all of our favorite genres and combine them into an urban funk gumbo sprinkled with smooth jazz and sometimes a side of hip hop. This fusion results in a sound that is characterized by smooth baselines and drums and warm sultry Fender Rhodes tones that create some of the sweetest melodies that the human ear has ever heard. This musical project introduces a new member to the Black Steel All-Star Band, Mr. Alexander Rolloft Jr., the young man from England with a unique brand of Neo Soul and Spoken Word that adds a little flavor to the mix. His style is like George Clinton meeting Michael Franks and he seems to captivate audiences as they hang onto every syllable. We hope you enjoy our music. Mahalos.