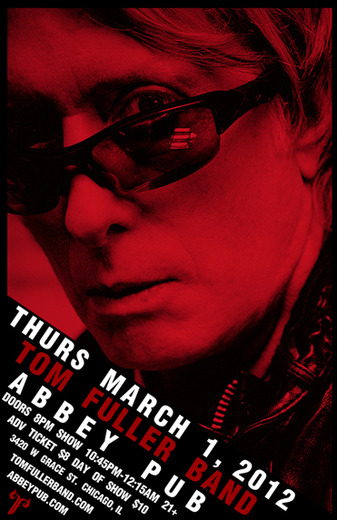 “Kick ass and take names” – it’s a saying that they like to use in Chicago, the birthplace of the Tom Fuller Band, to describe how to get the job done. Not in an Al Capone way you understand. Although Tom’s grandmother did work for the notorious gangster. But rather by enlisting some of the biggest names in the music industry to produce Fuller’s third studio album Ask.

On first listen you can...’t help but be decadently seduced by the voodoo drums of the opening track Lovers, hooked on the impossibly contagious title track Ask and carried away by the closing magical escapism of Garden Dreaming Days. Ask is an album that continually manages to surprise, challenge, captivate and inspire

Tom Fuller is a maverick and a troubadour. He’s also the same guy who, as a kid buying his first Paul McCartney album, never imagined that he would wind up recording the new album with two of his band members, Abe Laboriel, Jr. and Brian Ray.

After trailblazing a path across America, the addition of new band members, and recording in both LA and Chicago, comes this life affirming album that is at once emotional and engaging.
‘It’s been a one hell of a journey,” says Fuller. “The new album’s like a songbook that’s accompanied me all along the trail. Every track means so much to me. I think it’s my strongest collection of songs to date.

Hailing from the Windy City, the Tom Fuller Band embodies the soul and creative energy of the city’s rich musical heritage - from Chicago’s finest rhythm and blues, through Cheap Trick to late period Wilco. The songs embrace Fuller’s distinctive blend of innovative melodies and chord structures, alongside lyrics that engage, uplift and resonate with passion and truth.

“a fresh rock album with a lot of surprises! ” – www.germanblogs.de “for those who are waiting for the first shafts of sunlight, we can advice this album!” – www.metal-inside.de “9 of 12 Points / With ‘Ask’ and for a fan of Mainstream Rock the Tom Fuller Band has released an album which must be definitely put on the top of your shopping list!” – www.soundbase-online.com Tom Fuller Band’s third album, Ask, is quite simply, a great pop record.” – Birmingham Sunday Mercury Fuller can hang and bang with the best of them, but dances away before you can get a bead on him, leading you on swathes of melody to somewhere you always wanted to go. The perfect summer album? Getting there. Only one thing to ask: “Have you got the new Tom Fuller album?” – PowerPlay Fuller’s songs are a mix of dreamy pop and 70s rock guitar. The title track has echoes of Dion, but it’s the sound of the Beatles that permeates much of the album. Shades of Cheap Trick and Tom Petty… this is one for people who like well crafted pop rock.” – Fireworks Magazine