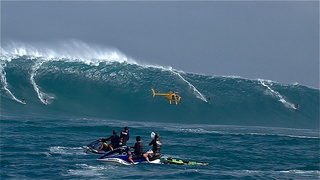 Tim has been trading as Tim Bonython Productions p/l, is a leader in extreme DVD distributions & event coordination ( ASMF, The Australian Surf Movie Festival). It’s the brain child of Tim Bonython an award winning surf film-maker ( ref "Blackwater, the story of a place called Teahupo'o), and photographer/director whose association with the surf film trade began in 1978 when his first trip to Hawaii took him to the North Shore of Oahu with a Super 8 camera. Besotted with the big waves & visually one of the greatest sports Tim had set eyes upon – surf films were his destiny.
From the beginning back in 1981 Tim made surf movies his industry. All time Bells in 1981 was Tim’s first pro event and with waves up to 15 to 20 feet, then taking the shot footage on the road showing them in pubs & clubs was the perfect offering.

Tim created a totally unique situation running a pub & club tour up and down the east coast & back to his native town of Adelaide. Sydney is now home to Tim & his family as it has been for most of his life.

It started with Billabong earliest video’s Surfing into Summer – Filthy Habits liaising with Billabong’s founder Gordon Merchant & Vince Lawder. Then went onto create Water Slaughter & Strike Force with Guy Finlay – then met up with Bill McCausland, Jason Muir & created the Gorilla Grip video series with Gripping Stuff 1 & 2. Plus incorporated video advertising with the local surf companies with the Hawaii Nine O series. This was a yearly project taking him to Hawaii Nine Six.

In 1998, Tim went to Maui for the first time under the advise of great surf photographer Dan Merkle and shot one of the biggest swells at the now famous Jaws called Biggest Wednesday. Arguably the biggest selling surf video in sales history in Australia. Up to 40,000 units sold. Around that time Tim was employed by the US toy company Mattel and made Morey body board movies RAW 1 & 2 – The Contest then body board instructional dvd’s BIO 1 & 2. He went onto his final body board flick ‘Loaded’ – then back to stand up flicks in 1999 with Snuff – Lost in Space – Down Load & Automatic.

During that time worked with Quiksilver on many pro events including all the Quiksilver Pro Events in G-Land, Fiji, Japan, France & California.

In the last 10 years Tim has found a new home in Tahiti shooting the most publicised surfing location in the world called Teahupo’o.

Teahupo’o has been a modern day melting pot of everything that makes surf film making a serious pleasure. Hence Tim went out and created the award winning documentary Blackwater – The story of a place called Teahupo’o.

Since Blackwater in 2005, Tim made May Dayz – two incredible unique days at the same location.

Over the last 3/4 years Tim has also been hard at work creating his new project, which has become his biggest challenge to date. Called What is Surfing & Trigger Happy. Even though it has been three to four years in the making this project it's like a great red wine - the longer it takes to serve it the better the wine will be...

Since the Souled Out tour the 7th edition of the Australian Surf Movie Festival toured - normally we would do this in the Aussie Spring but due family situations we decided to run it after Souled Out. Come Easter Tim was close to collapsing due to work fatigue after running two national tours back to back.

During the ASMF tour Tim also filmed the first two world tour surfing events - the Quiksilver Pro on the Gold Coast & then in Easter the Rip Curl Pro at Bells Beach.

Since Tim has been back in Sydney and on Wednesday 13th of May - Tim arranged 7 time World Champion Layne Beachley to surf one of Australia's mosts feared waves, OURS at Cape Solander. This day has now become set in history as one the best waves ever surfed in Australia by a female. Tim's footage went every where - on all Australian news broadcasts & became world wide news via surfing media web sites.

For more info & a video of the action check out.

You will hear more as it progresses. So stay tuned..