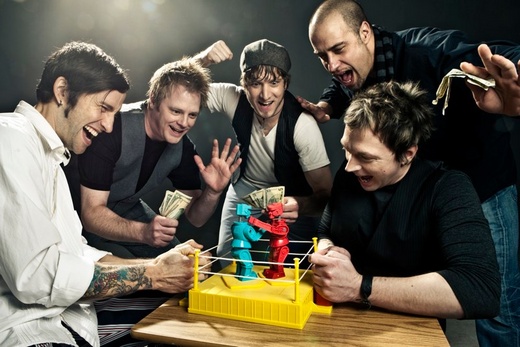 Refreshing. Retro-cool. Original, yet classic. With one mod-style boot planted in classic British rock and another planted firmly in today's pop universe, Throwback Suburbia continues to break new ground with their fresh take on ultra-hip, harmony-laden power pop. And with the July 2009 release of their new self-titled album, the boys have once again delivered.
The road to Throwback Suburbia’s new album began in the summer of 2008. Eager to follow up on their highly successful 2007 release Four Play, the band partnered with producer/engineer Jeff Stuart Saltzman, who in the past has engineered albums for the likes of Death Cab For Cutie and The Shins. “We wanted to make a modern, yet classic sounding record and, being fans of Jeff’s work, we felt he would be able to capture what we were looking for,” said guitarist Paul Bond.

The band spent the better part of eight months tracking at Magic Closet Studios in Portland, OR. “Jeff really has an attention to detail in a way that we had never really experienced,” explains drummer Mike Collins. “I remember one day in particular, we spent an entire day working on the sound of one of my drums. At the time, it was maddening; Jeff was hearing things that he wasn’t happy with and refused to go forward until it was perfect. But ultimately, he got us exactly what we were looking for.”

As the songs began to take shape, the band began to discuss who would be best suited to take on mixing duties. Ultimately, some living legends were brought on board to collaborate with the band.

Having previously worked with Throwback Suburbia on Four Play, Mark Plati (David Bowie, The Cure) was a logical choice. Working from his studio in New York City, Plati mixed several tracks on the album, including the first single “Private Oasis.” The band then turned to the legendary Jack Douglas to take the helm. Douglas, best known for his work producing albums for Aerosmith, John Lennon, Cheap Trick, The Who and many others, spent time with Jimi Evans, Mike Collins and Paul Bond at Swinghouse Studios in Hollywood, CA mixing “Perfectly Okay” and “Same Mistake.”

“Working with Jack Douglas was an unbelievable experience,” said Evans. “The way he approaches a song and is able to draw out the essence of the music was simply a joy to watch. To have the opportunity to collaborate with him was like a dream come true.”

Also lending their considerable talents to the process were Marc DeSisto (U2, Sheryl Crow) and Chris Manning (Jellyfish), who worked from their studios in Los Angeles and San Francisco, respectively.

The results of this year-long creative process are hard to deny. Throwback Suburbia has crafted an album that has eclipsed all of its previous efforts, which, considering the quality of the band’s past work, is no small task. From the opening beat of the first single “Private Oasis” to the ELO-esque “Head Over Heels” and soaring ballad “You”ll Never Know,” Throwback Suburbia has come forward with an album that instantly reverberates with what one loves about music: excellent song craft, catchy hooks, impeccable harmonies and melodies that stick in your head for days.

And along the way, the band has built an impressive resume of accomplishments in just three short years. Their 2007 single "Circles" helped them to become the most played unsigned artist on several FM radio stations across the country and garnered regular rotation on Rodney Bingenheimer's show on KROQ in L.A. They won the Garage Band/Budweiser True Music contest, providing them with distribution to thousands of Live 365 radio stations. Every single track they have submitted to Garageband.com has been in the Top 10 (four of them simultaneously), while their single "All About Me" ascended to the #1 spot.

While striking up artist endorsements with Eastwood Guitars, DiPinto Guitars, Pearl, D'Addario and Evans among others, and sharing the stage with the likes of Rooney, The 88, Veruca Salt, Gin Blossoms, Tender Box, Rose Hill Drive, Voxtrot, Cherry Poppin Daddies and Bleu, Throwback Suburbia has established a very loyal fan base and is playing to packed houses wherever they land.

Their relentless touring schedule has taken them down the west coast of the United States with club dates, interviews and record store appearances in Seattle, Portland, Eugene, Lake Tahoe, Chico, Sacramento, San Francisco, Los Angeles (for the International Pop Overthrow Festival), Reno, Las Vegas and Anaheim where the band performed at the 2008 NAMM show and recorded a video segment for the youth lifestyle website Vimby.com. After making numerous television appearances in the last year, including features on FuelTV and Portland's PDXposed, BetterTV and FOX49 Entertainment Zone, PDXposed contracted the band to provide the theme music for their Saturday night show on NBC. They were also named the Eastwood Guitars Big Pick winner for 2008, which recognizes their favorite new act.

The ever-increasing fan support for Throwback Suburbia points to the powerful live performances they repeatedly demonstrate. That alone is a remarkable discovery in the modern day musical workings that have produced a surplus of unremarkable bands. Yet each time they play, Mike, Jimi, Paul, Eric and Mark exude the blissful confidence that can only come from doing something you love exceedingly well.

If you should find yourself having trouble locating a pulse in today’s music, Throwback Suburbia is the proof of life in power pop.