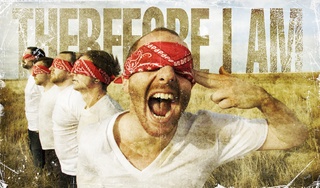 About THEREFORE I AM

These days, people put bands together looking to cash-in on a particular "scene." They cobble together a slick MySpace page, hire an agent and a "fan"-ager and quickly develop an inflated sense-of-entitlement. And while that's one way to go about it, there is also the old-fashioned DIY model: form a band with friends in a basement, tour your butts off until your songs and stage-show have something unique and powerful to offer and build a real following.

This was the roadmap for bands like Boysetsfire and Snapcase back in the day. And this approach has meant everything for Therefore I Am, whose fiery and impassioned hard / melodic rock mix defies easy categorization. Think about the fearlessness and self-reliance of boundary-breaking bands like At The Drive In and Thrice and you'll begin to have some idea of what Therefore I Am is all about, having developed on the road and in the rehearsal room.

"We're a rock band stuck between the hardcore scene and the pop / indie / screamo scene," laughs guitarist Brian Marquis. "We try to write intelligent rock music that's also heavy without being super-slick pop." Therefore I Am accomplishes that goal all over The Sound of Human Lives, their Equal Vision Records debut.

The album kicks off with the hold-nothing-back relentless attack of "Death by Fire," just one of several strong standouts on a record decidedly absent of filler material. "My Father, The Fatalist" breaks new ground for the band musically while "It's No Wonder Why" is arresting and haunting in its naked honesty, addressing head-on the death of singer Alex Correia's father, who long struggled with drug addiction ("It makes me proud to be in a band with somebody who can speak so candidly," says Marquis). The title track is an instrumental that captures the vibe of the entire record.

"One of my favorite songs on the album is 'I Am Only An Island,'" explains Correia, "because it's the most aggressive thing we've ever done. We all love hardcore music. It's angry and it sums up how we're feeling about a lot of things."

The first incarnation of Therefore I Am played as many shows as they could, with the pre-2006 version releasing The Summer EP and other material along the way. But it was when Marquis and guitarist Travis Alexander joined up with Correia, drummer Chris Fernandes and bass player James Creighton in 2006 that Therefore I Am really took shape, embarking on major tours (including the Boston Warped Tour stop) and cutting some demos with producer Matt Squire (Panic! At The Disco, The Used).

"We really started to get a lot more serious about what we wanted to do with our music," says Marquis, who is perhaps the most organizational and business-minded member of the group. "We started setting goals. We wanted to tour. We wanted to make records. We did everything on our own for as long as we could handle. We put all our money into the band. We tried to make smart decisions. Then in the fall of 2006 we went out on our own and did a 5 week tour of the US. It was all self-booked; some of the shows were completely awful, some were not so awful. Touring really tightened us up as a band." That year also saw the release of the You Are Connected EP.

Therefore I Am opened the Rockstar Taste Of Chaos show in Boston the following year, with Alternative Press spotlighting them as unsigned band of the month. They self-released another EP, Escape, and they toured extensively with bands like As Tall As Lions and The Receiving End Of Sirens.

It's thanks to that hard work and self-reliance that Therefore I Am should enjoy a long career and sidestep the fickleness of passing trends. "We don't want to be a hype band that's just here for a year. We're in it for the long haul," says Marquis. Equal Vision became aware of these facts surrounding the band and signed them to a deal in 2008.

"I sometimes compare it to kids in college," elaborates Correia. "There's the kid whose parents pay for everything. All he does is skip class and get drunk. And then there's the kid who works 40 hours per week and takes night classes. Who is going to appreciate their education more? There are bands who practice their stage moves and dress however they think they are supposed to. We're influenced by bands from a different time, who made music for its own sake."

Therefore I Am fashions itself as an outfit who can share the stage with a lot of different types of groups, recalling the camaraderie of bands who were united by shared passions and work-ethics and would appear on the same bills regardless of which ones were melodic and which ones were super heavy. "People hate to say what their band sounds like," acknowledges Correia. "But there is no way to generalize our music. We're all fans of different styles of music, very different styles, and the way that meshes when we write collectively shows."

The famous René Descartes quote "I think, therefore I am" was really just something that sounded cool to the guys back in 2004. They had no idea just how fitting the name would really become. Marquis explains, "It was kind of a self-fulfilling name for us. We strive to be honest with our music, lyrics and the way we approach people. Take us as we are. This is us. This is it. No bullshit."