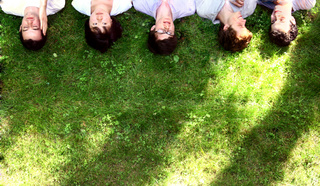 The Novel Ideas is a rock-folk outfit from the sprawling suburbs of Newton, Masssachusetts. Daniel Radin started the band with the intent to emulate the sounds of My Bloody Valentine, but failed and bought an acoustic guitar. This worked out much better, and The Novel Ideas was born. The name was chosen due to Daniel's affinity for writing songs about books. After various member changes, sad goodbyes, and happy hellos, the lineup has finally settled. Their first self-released album, "Say Hello" was released in 2007 and was highly praised by those who reviewed it. Their sophomore effort, "The Sky is a Field," is to be self-released and available free of charge from their website. There is no gimmick or core-value to The Novel Ideas other than to have no two songs sound the same and put on a fun and energetic live show