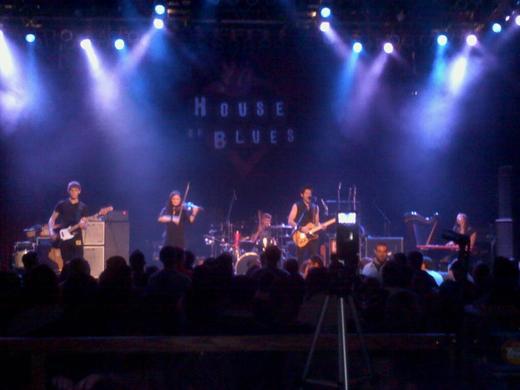 The Lifeline is a full force collision of guitar-heavy alternative rock and tightly-woven, textured symphony. And, like a particle collision, a tremendous amount of energy is the result. Founded by front man Ryan T. Hope and violinist Rebecca Faber, the band now features Derek Kalicky on bass and Rhapsody Snyder on keys and harp.

“Our goal is to evoke an emotion. Whatever that is, is for the listener”, say Hope and Faber. “We’re not political. We’re not preaching anything. There’s a tremendous amount of doubt and uncertainty in the world today. Our songs are about hope.” Faber and Hope call their musical style “Class meets Sass”, and it’s the motto from which everything The Lifeline does is derived from. “I’ve always kind of considered myself to be the sass and Rebecca to be the class,” says vocalist Hope. “I think it’s just in our personalities, and because we put so much of ourselves into the music, it becomes something that’s undeniable”.

From their humble beginnings as an acoustic duo, Hope and Faber forged a bond that few musicians share. The five-piece group is completed by a chest-pounding, high-volume rhythm section. Always pushing the boundaries with their unconventional use of Faber’s violin, The Lifeline continues to go beyond the limits of today’s alternative rock genre. The Lifeline has played to sold-out crowds in hometown Chicago and have also played at Summerfest, Warped Tour and more. They have even been honored with film awards for their music video “Trilogy."

While keeping the roots of their musical tastes close by, Hope and Faber have spent the better part of the last year perfecting their unique fusion of classical and alternative rock.It is with these songs that the band has made an immense impact in Chicago, particularly on alterative radio. Ryan Manno of WKQX Q101.1 in Chicago has said of The Lifeline, “they give me chills every time I hear them and are without a doubt Chicago’s best unsigned act! The combination of violin and vocals work as well as, if not more than, anything on the radio right now.” The song Romeo and Juliet has already been placed in regular rotation on Q101.1 and is quickly spreading to other markets in the Midwest.

After a recent appearance on Chicago’s own JBTv, host Jerry Bryant had this to say about the band, “I’ve been working with national and local artists for over 20 years, and The Lifeline represents a level of class and sophistication that makes them an incredibly unique addition to the music scene.”

"The Lifeline gives me chills every time I hear them and are without a doubt Chicago's best unsigned act! The combination of violin and vocals work as well as, if not more than, anything on the radio right now." -Ryan Manno, Radio Personality for Q101.1 and host of Crash Test Radio. He also added, "Their sound is massive and epic enough to fill arenas. They will."

"In all the year's I have been involved in the local Chicago music scene, there has never been a band quite like The Lifeline. When you see them live you may not know exactly what you are getting yourself into, but by the time they finish you are left in awe. Their attention to detail rivals anything that mainstream rock has to offer. It has been a pleasure watching them grow." -Chris Payne, Host of Q101.1's Local 101

"A lot of people have been waiting for a band like The Lifeline. If you hear them, you stop everything you're doing to hear more. In an over saturated rock world, there is no doubt in my mind that this band has the talent & the sound to reach the top of the top." -Kevin Manno, Radio Personality for Q101.1 and host of Crash Test Radio.

“The Lifeline's live performances are EPIC! Ryan Hope's imposing presence and haunting vocals prove what we in Chicago already know...Hope is a Rockstar! Add to Hope, Rebecca Faber's sultry heroics on violin, and you have a live show that no one will forget!” -Brian A. Rosenblatt, entertainment attorney| SmithAmundsen LLC