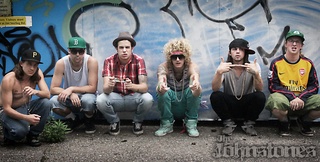 “We've been banned from 'The Happiest Place On Earth,'” confesses The Johnstones vocalist/drummer Ryan Long. Yep, after a particularly debaucherous evening behind the pristine gates of Disneyland, the Ajax, Ontario outfit managed to piss off Mickey to the point where they are no longer welcome. Their Polaroid images are forever pinned on the wall of individuals outlawed from the land of sugary smiles and innocence...just another day in the sordid, sensational life of The Johnstones.

It's only been six years since the collection of tattooed troublemakers known as The Johnstones gravitated together in high school. Since then though, they've become unmistakable for both their raucous music and provocative shenanigans.

From assaulting Disneyland to spending the night in a Halifax drunk tank for breaking into an office building to throw a party and having a party to pouring blood out of instruments after particularly disorderly gigs, The Johnstones have been there, done that, made the t-shirt for you to buy.

While craziness is natural in The Johnstones, it never outshines the reason they've come together: the music. In fact, tales of harrowing escapades only showcase the band's enthusiasm for being musical innovators. And what style of music would such hyperactive miscreants compose?

An ingenious melee of styles and attitudes, The Johnstones manipulate the strongest elements of their personal preferences, consolidating them into a most anomalous, extraordinary and fucking catchy original genre: a collection of—but not relegation to—ska and hip hop-infused punk music taking the catchiness of '90s bands such as Rancid and No Doubt yet adding a hip hop/dance vibe and lyricism that produces a fast, energetic and virulent style.

“We're a combination of all the different influences and styles of music we listen to and our attitude,” shrugs vocalist/guitarist Jarek Hardy. “It's uplifting music; borderline party but without being silly. The goal is to have music that you can blast out the window of your car and feel cool doing it.”

“Punk, ska, rap...it's all blended in there,” adds Long. “If there were a record section called Good Time, we’d be there. Though our music isn’t solely any of those styles, you can hear each style under-toned uniquely in every one of our songs.”

When honed-in, that devotion and eagerness (peppered by a sense of Attention Deficit Disorder) becomes an enviable work ethic that permeates the entire band. They become nothing less than a multi-media blitzkrieg. Topping YouTube's regular play lists via their 50 self-produced and half-dozen professional videos and with hundreds of daily spins on their MySpage page and countless albums sold, The Johnstones have become a phenomenon based not only on their powerful music but also their divine prowess at infiltrating all senses.

That lifestyle culminates in latest offering Can't Be Trusted, their sophomore full-length, third release with Montreal-based Stomp Records/Union Label Group. Utilizing the expertise of producer/re-mixer Fil Bucchino (Tricky, Flashlight Brown, Saint Alvia), Can't Be Trusted captures The Johnstones at their most sophisticated; is poised to be their break-through effort. A cohesive advancement, its songs display a band allowing their natural tendencies to develop as well as actively progressing by dint of constant self-evaluation/introspection.

“We've grown both organically and by a pointed decision,” notes Hardy. “We definitely went through some changes to finally figure out where exactly we wanted to be. We have had songs that were really bad-ass but not particularly well written and the opposite: great songs that were lacking some of the attitude that we encompass. We finally figured out how to put the two together. Can't Be Trusted is fresh, bad-ass and fun; totally representative of who we are, where we want to be and where we are going musically.”

As expected, this feverish energy translates easily to The Johnstones' live show, bolstered by Long's stepping out from behind the drum kit in order to assault audiences front and centre. And as noted, all of the insane antics that ensue from such spectacles are the end result of these young men determined to live out life to the fullest.

“The Johnstones are real,” Long interjects passionately. “We practice what we preach to the fullest extent of the cliché. We are one of the only bands that live life in the true rock and roll fashion. We live hard and have a good time. We work hard to keep fans laughing and interactive; we have a huge viral presence, we pioneered our own fresh brand of music and work about as hard as a band possibly can. People that meet us know that we’re real, that we’re true to what we write about and that there's no illusion. We’re as real as you get.”