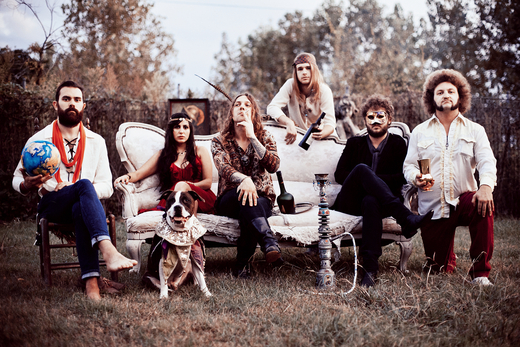 The Constellations could have called their debut album After Hours. Sure, Martin Scorsese already used that name for his 1985 black comedy, but the two works share much in common. Both are wide screen spectacles rife with seedy scenes and eccentric personalities, propelled by a manic energy that hustles the audience deeper into the unexpected. But Southern Gothic was a better choice. Because The Constellations stomping ground is Atlanta, GA, and in the wee small hours of the morning, A-Town can get awfully bizarre.

The record is all about what happens in Atlanta from 2 AM until noon. Your tour guide on this madcap adventure is the magnetic frontman and vocalist Elijah Jones, the ringleader of the twisted circus that is The Constellations, who spent two years writing and recording the album with producer Ben H. Allen (Animal Collective, Gnarls Barkley), along with some storied cronies from the local scene. Not that they set out with specific intentions. Far from it. “All of us wanted to do a record about Atlanta, but we never said it in words,” recalls Jones. “But the deeper we got into it, the more we realized we were writing a concept album.”

Atlanta has been providing the backdrop and soundtrack for Jones life since childhood. Now he wanted to share his hometown’s underbelly with the rest of the world. “Atlanta is a huge city, but it still has a small town feel to it,” explains the singer. “Everybody knows everybody, you run into the same people at the same bars every week. So it’s still kind of Mayberry, but with all the yummy stuff that comes along with being a big city—and all the bad stuff, too.”

“Atlanta is strange,” he adds, “because we’re all basically pushed together.” The hip-hop heads, punk rockers, and indie kids all rub shoulders and mix it up. Southern Gothic reflects that inclusive diversity in its far-reaching sound. “The record was designed to sound lyrically and melodically very thought out, and sonically very disorganized,” comments Allen. One expects nothing less from a singer who cites Tom Waits and Cee-Lo of Goodie Mob and Gnarls Barkley as his musical heroes, working with a producer who name-checks Fela Kuti and Gorillaz among their record’s key influences.

Check out the centerpiece, “Step Right Up (A Tribute To Tom Waits).” The foundation of this delirious nine-minutes-and-change comes from a cut on Waits’ 1976 classic Small Change. But it mutated along the way, with customized lyrics about the ATL. In this cavalcade of neon lights and shady characters, no names have been changed, because no one is innocent. Jones beckons the listener to keep up as he lurches from the Clermont Lounge to the Drunken Unicorn and beyond, his carnival bark underpinned with dizzy disco whorls and eddies, and anchored by a soulful chorus of irresistible exhortations. The extended percussion jam that caps the track calls down an ecstatic abandon on par with LCD Soundsystem. More cowbell? You don’t have to ask twice.

Yet there are many twists and turns ahead of “Step Right Up.” The eleven-song set kicks off with “Setback,” a psychedelic freak-out of wiggling synthesizers and vintage organ, shot through with a nasal drawl reminiscent of Beastie Boys, and a wordless chorus that won’t let go. For the salacious funk number “Felicia,” Jones drew inspiration from the laidback ‘70s vignettes of Iggy Pop and Lou Reed. “December” opens with a baroque snippet a la some lost minuet, but detours into ‘60s folk rock harmonies as it picks up momentum.

The band’s name refers to the myriad musicians from the regional scene who either contributed to making Southern Gothic, or have since played in The Constellations live band. One luminary who drops in is Cee-Lo, whose verse on the electro-rocker “Love Is A Murder” prompted a completely overhaul the track underneath.

Another guest is suburban rapper Asher Roth, lending his playful rhymes to “We’re Here To Save The Day,” among the disc’s most insidious moments. On the one hand, this ditty’s sound is pure sing-along bliss, with a gleeful chorus delivered by Elijah’s niece and nephew. Yet at the same time, Jones and Roth drop rhymes that lampoon commercial top 40 hip-hop and chest-thumping poseurs.

Because Southern Gothic was created on the artists’ own time and own dime, as an experimental studio project, no thought was initially given to recreating the songs live. No, that only came after it turned out there was plenty of demand for The Constellations to do exactly that. “We’d put in fifty billion handclaps and shakers, all kinds of crazy stuff,” admits Jones. “That’s why we have eight band members.” Although the line-up would go through numerous changes, today its stable core finds Jones accompanied by a five-piece combo and the non-stop shimmy, shout and wail of two female back-up singers.

Well before The Constellations had settled into its current incarnation, their explosive shows were selling out all over the city. Wes Hoffman had been putting on parties at Atlanta hot spot Star Bar, and booked one the earliest Constellations gigs. “The first thing I noticed was the freshness of the music,” he remembers. Lyrics about Atlanta made things more appealing. But the key was seeing how fired up the crowd got. “I knew this band was on to something from how people responded.” When the group told him they couldn’t play a subsequent gig because their bassist was unavailable, Hoffman stepped in and learned the bass parts himself. He’s been part on the team ever since.

You don’t need an in-depth knowledge of the 404 to appreciate Southern Gothic. One of The Constellations’ biggest markets outside Georgia is Milwaukee. Their songs may reference specific sites, but the appeal is universal. Perhaps because we all know characters like these. And Jones, who grew up singing in the church and whose father was a Baptist deacon, recognizes how to exploit the tension between dark and light in everyone’s life. “People ask me, ‘How can you be into this weird after hours scene, coming from a Christian background?’ But you can’t just write about the good in life. There’s some bad shit in the human heart, and that part of it is just a little more interesting to me.”