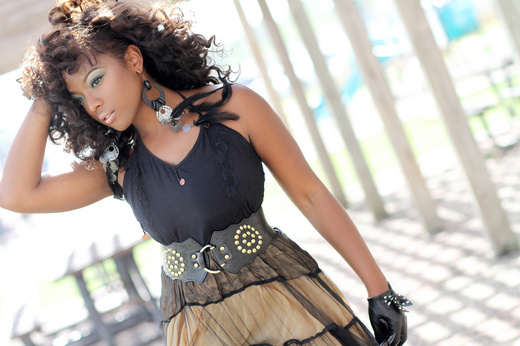 In an age of gimmicks and over processed sounds, the nostalgic idea of authentic vocals and magnetic stage presence seems un-imaginable. But there’s power in experiencing Grammy-nominated artist Tamar Davis: reminiscent of funk, soul, rock and R & B. She evinces passion meeting entertainment through her authentic, high-energy performances that makes her “Prince’s favorite singer” ~ Washington Post.

Unlike the vast majority of post-Whitney/ Mariah Carey soul singers, Tamar Davis is a true entertainer with a fully developed stage presence. She’s sassy and sexy but also able to laugh at herself, a trait solely missing from a genre filled with dour, overly serious women ~ Pioneer Press

A few years later, Tamar’s demo caught the attention of music royalty: Prince. Tamar was invited to his Paisley Park studio and offered a production contract. Though she didn’t get to meet his royal badness and a deal wasn’t sealed, a seed was planted.

Tamar cultivated her talent at Houston’s Fame equivalent—The High School for the Performing and Visual Arts—and was among 20 honorees selected from a field of 8000 international applicants for the Presidential Scholar for the Arts award. Intent on furthering her career and her education, Tamar headed to Los Angeles to study music at the University of Southern California. She graduated not only with classical training and a Bachelor of Music degree, but also with the ability to sing in French, Italian, German, and Swahili.

Tamar returned to the Star Search stage in 2004 for the “Battle of Champions.” Despite praise from judges like Naomi Judd—“ You have an amazing voice”--and show host Arsenio Hall—“It’s so unique. It has a Stephanie Mills/Whitney Houston vibe...”— she didn’t prevail in the competition. She also auditioned for the fourth season of American Idol; but didn’t make it in front of the three charismatic judges. A producer’s critique: Tamar was too polished. That polish served her well as she landed a gig as the lead vocalist of a grown-up girl group: a jazz/funk band called Angara, recording with master pianist Joe Sample, and singing with “sticky fingers” jazz legend Lee Ritenor and Tamia.

In early 2005, at the behest and invitation of famed choreographer Fatima Robinson, Tamar attended an awards show after-party hosted by Prince. Seizing the opportunity, she reintroduced herself and a million dollar question followed: “Can you sing for me?” Prince asked. The answer was clear: Tamar blew him away and the seed began to grow.

Tamar became a vocalist in Prince’s band, performing at his renowned house parties, and even joining him on stage for a solo at the NAACP Image Awards. While contributing background vocals on Prince’s 3121 album, she also began recording her own. By the end of the year, the student and teacher were both signed to Universal Republic Records. Now, Prince was ready to introduce his “favorite singer” to the world.

In 2006, the dynamic duo set off on a cross-country tour. At the electrifying, sold-out shows reminiscent of old soul revues, the leading lady’s performances were the talk of the town. Commanding the stage, Tamar won over legions of Prince fans across the world and gave music critics something to talk about.

In Philadelphia, Paul Altobelli wrote that Tamar “had the body and moves of Tina Turner and Aretha Franklin's voice” and the City Paper lauded her “powerful voice and saucy showmanship.” The Washington Post reported that Tamar “impressed with choreographed calisthenics and luscious vocals.” Chicago’s Unrated Magazine said with “her soulful voice, sultry demeanor and magnetic stage presence…Tamar has all the makings to be a star.” The Houston Chronicle marveled at her “magnificent and powerful voice.”

A veritable knockout with voluminous hair, desirable curves and feisty moves, Tamar was by Prince’s side on "Saturday Night Live," "Good Morning America," and both the 2006 BET and Brit Awards. And yes, that’s Tamar working it in his Fury video.

With the introduction made, new fans yearned for more. Yet, the world wouldn’t get to know Tamar as quickly as planned; Universal decided not to release her album due to a departed relationship with her mentor and the record company. But you can’t keep good music down. One of the many songs Tamar and Prince wrote and recorded together, the forcefully inspirational Beautiful, Loved and blessed was recently nominated for a GRAMMY.

“Words can never describe the times of being in the studio or being on stage or headlining a Prince tour. He's a genius. He's a businessman. He's innovative and he's skilled. I can humbly say I've had the honor to be blessed with learning how to be an overall entertainer. Stepping out on my own was hard in the beginning because I started using the training wheels as a clutch. But when you are called to an industry that speaks to the heart of man, you have to continue to search for the high call. You can't always hear when you're leaning on man's faith or desires. Prince told me I can be a pioneer in this business now fly and be that and more. The setbacks, trials, and tears have made me understand that your current circumstance does not depict where you're going. Its through your faith and perseverance in God that takes you to where you need to be.”

Remarkably, she is now one of the first unsigned R&B artists to have been nominated for music’s highest honor and was just named Houston’s Rising Star 2007 (Ensemble Theatre). Honoring her rising star, Tamar Davis continued to climb both onstage, currently performing in Tyler Perry’s “Madea’s Big Happy Family,” and formerly cast as the nuanced lead in Perry’s hit stage play “The Marriage Counselor” (New York Times) and in the studio. Finding favor with the television/movie mogul, Tamar then showcased a tear jerking “To Dream the Impossible Dream” for the grand opening of Tyler Perry Studios. The question of the evening became “who was that singer?”

The answer can be found on her second studio, yet first released self-titled album “My Name is Tamar…” It displays her distinctive sound, a result of a steady diet of artists as varied as Ella Fitzgerald, Sarah Vaughn, Sting, Aretha Franklin, Whitney Houston, Yolanda Adams, Barbara Streisand, Janet Jackson, Prince, Chaka Khan and AC/DC. It is a genuine collection of anticipated songs resonating the importance of lyric to melody and passion to performance. It blazes her bold, golden pipes with incisive tone and timbre through lyrical magic. With infectious party songs and soul ripping ballads, Tamar redefines an era where Rock and R & B were still kissing cousins. It’s a gathering of fresh sounds from a veteran artist dedicated to the communication of music and audience. Being true to the relationship of artist and song, Tamar delivers honesty and compassion both on record and live.

She began composing “My Name is Tamar…” two years ago by using her own finances while starring in Tyler Perry’s hit stage-play “The Marriage Counselor.” Composed of thirteen inexpungible songs, “My Name is Tamar…” compels you to appreciate where Tamar began her journey to where she is now: an artist whose trials have maintained her to establish a career that spans through time. Tamar’s’ self-composed album opener “Just Do It” grooves on Prince-inspired funk with its unforgettable baseline. With its fashionable hint of distinction “Just Do It” emphasizes 80’s musical changes and prods you that “her name is Tamar and she loves to sing.” It’s about the finality of procrastination, Tamar says, and moving forward. Another of the albums persuasive songs is her single “Heartbeat.” A melodic flux of desire, Tamar describes Heartbeat as her analytical approach to writing a song. Co-written with a high-school friend, “Heartbeat” is an innuendo of the physicality’s of one’s heartbeat yearning for an ear to hear her as she sings “Baby, listen to my heartbeat.”

We live in a time where some of us are in a hurry. We don’t sit in a car with our families and talk with each other anymore because we are either on the phone talking or texting and we don’t realize that the real cry is quality time with each other. Heartbeat asks that you listen to my desires. Whether it’s time of understanding or time to spend with one another.

Charismatic and idea-inspired, “Red Carpet” puts its listener in the innermost desires of Tamar as a little girl and to some, it makes you agree that we all want to walk the red carpet. “As a little girl I always wanted to walk the red carpet,” Tamar claims. “I had one for my sweet 16-birthday party and I felt like a million bucks. But I wasn’t the only one. Everyone who came to my party wanted to do the same. It’s something about the red carpet. It means you can look your best and not feel guilty about how much money you spent on your wardrobe or your hair or your nails. And the best part about red carpet events is there’s no curfew.”

Equally personal is ballad “Love Speaks.” Pushed along by a resolute and interminate piano, Tamar rides the melody with the simplicity of vocal and piano, climaxing to a boisterous dialogue of the language of love. It is poetic in nature as only Tamar describes. “As the only girl in my family, I've learned there’s not just one way to communicate the power of love. A relationship between a mother and daughter
is different between that of a sister and brother and so on. Regardless of how far or near I am from my loved ones, we still know that at the end of the day we love each other. Flowers given to one person may not mean the same as a good ole laugh to another.”

In August 2009, Tamar Davis was invited to sing in Antalya, Turkey. As the only American representation, Tamar performed both her single “Heartbeat” and “Love Speaks” ending with a dynamic rendition of “I Believe I Can Fly” with the Berlin orchestra. Receiving, once again, a standing ovation, Tamar continues to expand her audiences, being the most talked about performer that one must experience. Through this anticipation, Tamar perseveres as a force to be reckoned with.