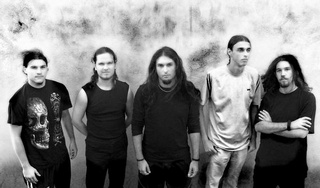 STILLBORN is a thrash/death metal band from Serbia.
The band was formed by Danijel Ilic and Ivan Dulic (Alister) in 2003.
The first demo “Whispers of Lunacy” was recorded in 2004, in studio “Wolf” in Jagodina, ( Miroslav Milutinovic – vocals, Dalibor Veselinovic – guitars, Danijel Ilic – bass and backing vocals, Ivan Dulic – drums).
STILLBORN promoted this demo on several gigs, including gigs in Jagodina, Kragujevac, Belgrade, Paracin etc.
During the period from 2004 until 2007 STILLBORN underwent some line-up changes. Mihajlo Tosic joined the band in 2005 as a lead guitarist. Dalibor Veselinovic was kicked out of the band and soon afterwards Miroslav Milutinovic left the band early in 2006. The band was facing real problems whether to continue to play. After considering several options, Ilic and Dulic decided to let Tosic take the role of lead vocalist and lead guitarist, while the new rhythm guitarist was Ivan Petrovic (Alister). With this line-up, STILLBORN started making some new songs, hoping that they would be recorded until winter 2007.
In April 2007, because of some personal problems, Mihajlo Tosic left the band. The new singer was Marko Stefanovic (AKA “The Lizard”) with whom STILLBORN recorded their first full length album “The Essence of Apocalypse” during summer 2007.
Unfortunately or not, this line-up didn’t last long. Marko Stefanovic left the band because of some unknown reasons. STILLBORN didn’t wait for too long and after much consideration they decided that Ivan Petrovic should take the role of a singer. Aleksandar Zivkovic (Sarcophag) joined the band in April 2008 as lead guitarist.
On 21.06.2008. Stillborn won second place on Sumadijski Demo Fest in Kraguijevac.
In August 2008, Lazar Peric joined the band as Stillborn's new rhythm guitarist!