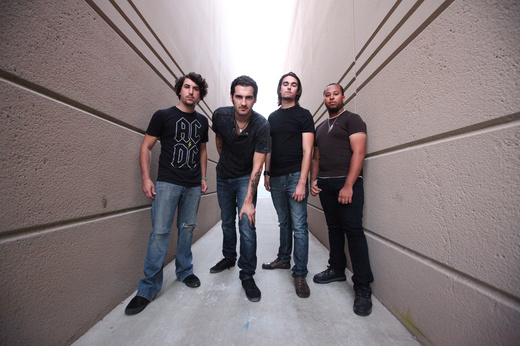 A multi-award winning Southern California band, Souljourners have caught the attention of music fans seeking something new & exciting. Voted Best of Fest at Temecula International Film Fest and Best Live Band at Inland Empire Music Awards. "A band Destined for Stardom" says Martin Brown, So Cal Awards show producer. Known for intense stage presence and musicianship Souljourners has been tearing California open with their unique blend of virtuoso elements and catchy hooks. The band consists of Michael Couts on guitar and vocals, Scoops (David Brockenborough) on bass, Paul Ellingson on keys, Jimmy Marshall on drums. "Forget the fact that this is a young group of guys and hold them under the same microscope that you would for Dream Theater, Galactic Cowboys or even Voi Vod - Souljourners will most certainly emerge from the test as true blooded rockers with a sharp mind for progressive arrangements" says Nelson Lee, The Prog Files. Souljourners will be touring the U.S. this summer to support their new songs & debut album Mind Control produced by Frank Gryner and Karen Stever and which also features Phil Collen, guitarist from Def Leppard, on their song Crazy Times! Check band schedule for cities and dates and be sure to catch their show, it will definately be one you won't soon forget!