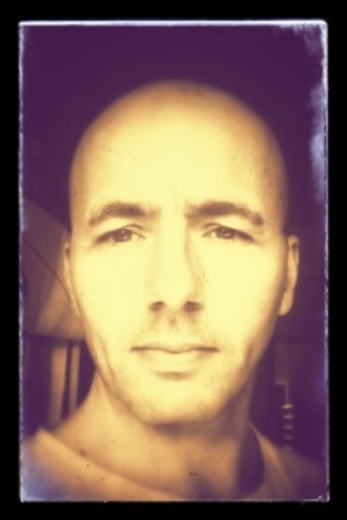 Who is Sole Brick, anyway? Born Scott Belcher, in Gateshead, Tyne and Wear, North East of England, United Kingdom (just in case your geography isn't that hot) in December 1970 (seems soooo long ago....well, could be because it is!).
Brought up on the likes of Eric Clapton, Fleetwood Mac and other 70's bands (mainly subjected to it from parents) and later on from the differing styles of Madness, The Police and yes, Bon Jovi.
Started playing the guitar at around the age of 16, in the days of heavy rock (initiated by hearing aforementioned Bon Jovi), after hearing friends playing on their Strat electric guitars. Got a cheap Strat copy as first guitar and small amp and started bleeding the fingers to get up to a standard where crunching rock riffs could be blasted out (to the detriment of my parents and younger brother's ears).
Set up first "rock band" with a few friends not long after (proficiency on guitar was not high on the priority list - making some noise together was). So with drummer, keyboardist, female vocalist, bassist and guitar, Night Spirit was born (how corny can you get...). After a dreadful first "gig" at a school hall for the birthday of the drummer's younger sister and a crowd of her fellow 13 year olds, that was the end of Night Spirit...
Continued to play "bedroom rock" striving to improve, trying in vain to reach the standards of the likes of Steve Vai and Joe Satriani (if you don't know who they are, then check them out - they are the best guitarists around).
With constant moving around from flat to flat, decided that an acoustic guitar was a better option, and that "lightning speed finger shredding" wasn't going to be my forte, I plumped for the good old strumming technique, with the odd bit of "widdly-widdly".
As with everyone (I guess), had been singing along to songs that were definitely not in the right key for my voice, and therefore sounded terrible. But then found the extraordinary songwriting talents and vocals of Crowded House and in particular, Neil Finn. This was the right key - in more ways than one. This opened the door to "singing". Finding the right key and style started to bring out the singer- song writing talent that had been dying to get out.
And so started the songs, the lyrics and the vocals.
After getting a few decent songs together, started playing in front of friends, and what do you know... there was decent feedback. Always good for the ego...
It was then time to try and get another band together (being 15 years or so since trying the last time). So advertising was done for members: managed to get a singer (I wasn't quite ready to do that myself yet), drummer and another guitarist. Managed one rehearsal, started a relationship with the singer (a girl, by the way) and never managed to get everyone together in the same room at the same time again. That was the end of that.
So, instead of relying on other people, it was the decision to go it alone. Hence, Sole Brick. (You may be wondering where that name came from....well, wanted something with the same initials (SB) and something that communicated a singular composer/creator - Sole [one] Brick [building block]).
The next stage was to record the music. At this point, there was no computer or other recording facilities in reach. So it was just writing and remembering (not having the education in music to be able to use musical notation). So, memory not be that dependable, a lot of song material was lost.
But then, a laptop, Magix Music Maker Basic, a microphone and keyboard (musical one, that is) came into my possession and that really made a difference. Now the songs could be recorded. Not only that but a full band sound could be created all by one person! Fantastic!
With the addition of an acoustic bass (and more recently a lovely electric guitar with amp and effects pedal), the current setup of equipment enables the creation of a full band sound. Sole Brick is a recording artist only, at the moment. Basically due to the fact that trying to play live would require a full band, which just takes us back to the start again... What the future holds, well, we'll see what happens...