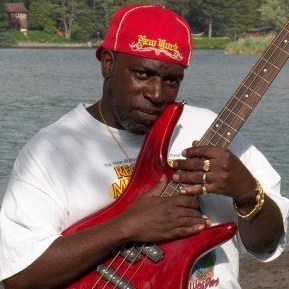 I am a very gifted and talented person in multiple arenas. I've been playing Electric Lead/Rhythm guitar since I was 8yrs old and Electric Bass Guitar since I was 32yrs old. I've been playing professionally since the age of 12. I played with quite a few Bands in my lifetime. I was in one the youngest Funk bands in Trenton NJ, called Central Funk, At age 14 I played with a  Gospel group out of Willingboro NJ called The Fabulous Ronnie Corbin singers and played on National TV with them on The Walter Stewart Show. At 17yrs old played Lead Guitar for a Local Trenton Front Row Singing Group called "A Touch of Class" Later I was privileged and honored to play guitar for the late Charles "The  Mighty Burner" Erland and had the pleasure of Headlining with Charles at a Concert at "The Apollo Theatre" in NYC. I've Also Played Newark Symphony Hall, NJPAC (New Jersey Performing  Arts Center). I have never taken guitar lessons I play by ear. I play R&B, Funk, Jazz, Rock, Gospel, Hip-Hop, Blues, Reggae and Salsa. I currently am the Bass player for a Local band called "The Blacklites". My  Debut  CD "SlikSly The Awakening" was released on 3/26/2012. I come from an era of Funk. My influences are The Brothers Johnson, Michael Jackson,EWF (Earth Wind and Fire), Pleasure, Ohio Players, Slave, Cameo, Blackbyrds, Marcus Miller, Stanley Clark, Victor Wooten, Rick James, Tina Marie, Prince, Time, Parliament  Funkadelic, Usher, Joe, Joe Satriani, Steve Vai,  and countless others. My Facebook Page is SlikSlyMusic