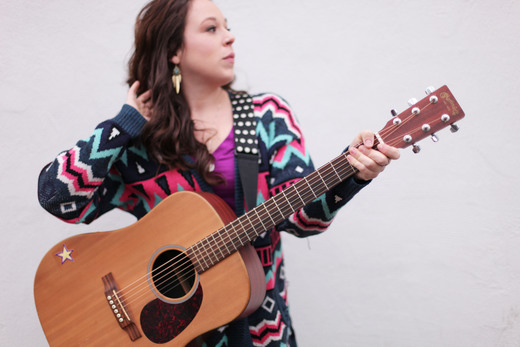 Since moving from Nashville to New England in late summer 2011, Boston folk songstress Annalise Emerick has demonstrated her aptness to awaken reminiscence in the minds of her listeners with just a few simple words. Worldly and wise after years of traveling, this is a conceivable notion, for in many ways the singer is a gypsy -- always restlessly exploring the notion of home musically, emotionally and geographically. She’s claimed a scattering of cities as musical muses, growing up in Austin and Seattle before studying music at Belmont University in Nashville, where she later recorded her first album with producer Brad Hill at Hill Studios.

With her 2011 acclaimed debut EP, Starry-Eyed, Emerick brought songs that have continued to resonate with audiences like “You Win,” “Round and Round,” and “This Love Won’t Break Your Heart” -- (which was exclusively premiered as a music video on November 28th via American Songwriter) -- thanks to a whirlwind slate of live performances and the immediate success of her seven track collection, (which debuted on the iTunes Singer/Songwriter chart at #9 its first day). The collection prompted an outpouring of attention from the national blog scene and a spotlight on CD Baby’s Music Discovery Podcast, which assured its listeners: “Fans of Ingrid Michaelson will feel right at home.”

Emerick’s clear voice, acoustic-driven style and earnest, contemplative lyrics have situated her among fans of Eva Cassidy, Patty Griffin and Brandi Carlile. But with Starry-Eyed, Emerick proved that her gypsy propensity lends itself well to her songwriting and creative process. Her ability to poignantly detail lessons from relationships and contemplate life’s continuous journey has revealed her as a multi-faceted person and artist to fans.

“...The celebration continues with ‘This Love Won’t Break Your Heart.’” -American Songwriter

“...[Emerick] blends folk music with pop sensibilities as she crafts melodies as pretty as her name.” -The Deli New England