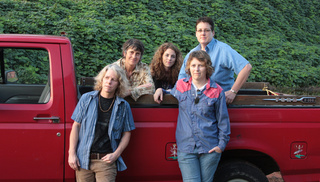 Roxie Watson is a five piece string band that is birthing a new musical genre – “alterna-grass” – a finely crafted blend of bluegrass, country, western and blues, with splashes of soul, zydeco and Hee Haw. Roxie Watson draws from the varied talents and musical histories of each of her members to deliver rich harmonies, amazing fretwork, and soulful solos. The Roxie Watson musicians are Beth Wheeler (Belloluna, Wendy Bucklew, The Brambles), Lenny Lasater (Lenny Lasater Electrical), Linda Bolley (Michelle Malone Band, Herman Put Down the Gun, Susi French Connection), Sonia Tetlow (Herman Put Down the Gun, The Paul Sanchez Rolling Road Show, Cowboy Mouth, STB), and Becky Shaw (Susi French Connection, STB, Reversing Hour). When you experience Roxie Watson’s music, you may spontaneously break into a two-step, hanker after an old flame, or simply relish the sweetness of a summer rain. Whatever your response, there’s no denying that each member of Roxie Watson is playing the music she was born to play.

Roxie Watson began as a duo when Beth Wheeler (mandolin, vocals) and Lenny Lasater (electric bass, vocals) began jamming in Beth’s carpentry workshop. The duo became a trio the moment Linda Bolley (electric guitar, acoustic guitar, vocals) sat in on a song at Roxie Watson’s first performance. The band soon got a gig performing at a birthday party. Beth drove her pickup into the front yard and the trio spent the evening serenading the party and most of the neighborhood from the back of that Ford F-150. When Sonia Tetlow (banjo, vocals) heard all the fuss about this amazing string band on the back of a truck, she decided then and there to go buy a banjo and jump on in – the band was ecstatic to have their fourth member! At that same truck show, Becky Shaw (acoustic guitar, accordion, lap steel, harmonica, vocals) fell in love with the Roxie Watson sound. Later on down the road, she was asked to sit in on a song or 2 with the gals, and at that moment she was enthusiastically welcomed into the fold. At last, Roxie Watson as we know it was born and has been writing original songs and collecting surprising covers ever since. Roxie Watson is now on a crusade to serenade the world, maybe even from the back of a pickup truck.