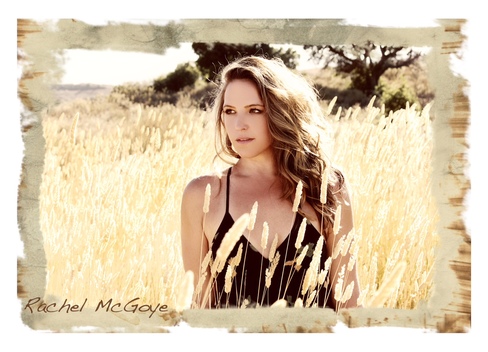 Who says quitters never win? After independently releasing her acoustic debut E.P., "What Day is It?" Rachel McGoye finally woke up and realized it was the day to quit waiting tables and become a full-time singer/songwriter. Five years in Los Angeles, several recycled and unsuccessful relationships, and a repeatedly stolen bicycle inspired her first full-length release, "Beautiful Disaster"(10Spot/Universal). Rachel's Sophomore release attracted comparisons to some of the most current, established and admired singer/songwriters.
Having obtained a B.A from the acclaimed Berklee College of Music, Boston, Rachel then headed to L.A, to pursue her dream of being a Singer/Songwriter. After a few years of writing, and playing several shows a year, solo and with a band, Rachel independently released her first acoustic E.P titled “ What Day Is It?” With the release of her E.P came the attraction of several Indie labels. In January of 2007, Rachel signed with 10spot Records out of Encino, CA and started recording her first full-length release titled “Beautiful Disaster.” Produced by Steve Harvey (The Temptations) and recorded at Studio at the Shores in Malibu, CA, Rachel had the astounding opportunity to record with some of L.A.’s most sought after studio musicians who have been playing for artists such as The Temptations, Chaka Kahn , Rufus Wainwright, Lauryn Hill and several other amazing artists

In November 2007, Rachel opened up for American Idol runner-up, Kellie Pickler, at the Pineapple Festival in Jensen Beach, Florida. She was also selected as a main stage artist for the 2007 NACA Regional West Conference where she showcased for hundreds of colleges.
January 8,2008 "Beautiful Disaster" was officially released everywhere music is sold, and that same day Rachel had her first Radio play on 101.3 The Coast in her hometown of Stuart. Rachel has joined up with the Florida Oceanographic Society of Stuart, which provides amazing opportunities for education and research aimed at increasing the knowledge of the unique coastal environments, on the 56 acre community. $1 of every autographed CD sold is donated to the society.
In May McGoye packed up her car for a 3 month cross country solo/acoustic tour, playing in 26 cities and states across the U.S. Upon arriving back in California, Rachel appeared on Fuel TV's 'The Daily Habit' as the first ever female acoustic performer on the show. In November 2008,the same month that Rachel released her e.p 'Down South', McGoye also made her debut at the Lyric Theatre in her hometown of Stuart, FL, as well as opening for the Atlanta Rhythm Section
. Rachel's 4th E.P titled 'Ghetto Gloss', produced by Alex Band (The Calling) is out now on ITUNES! Rachel strays from her folky roots with this Electro/pop album but her singer/songwriter flavor gives it the perfect balance of "Good POP". Her melodies still mystify, and the big production make each song one to be heard on the radio.