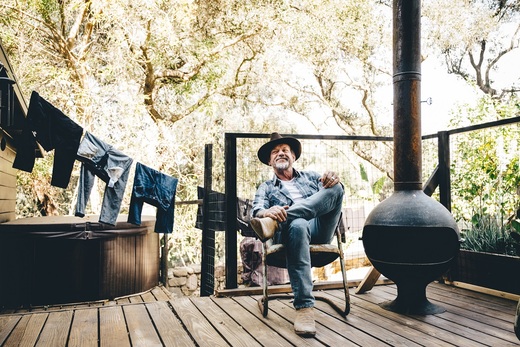 Born in New Jersey and raised on the West Coast. He is known as someone with something to say. Grew up listening to Elvis, Johnny Cash, Rick Nelson, Merl Haggart, and more.
Father was a biker/car mechanic/street racer. He met Ray's mother in front of Hollywood High school in the early 1950's and swept her away in a lowered black Cadillac. Ray's grandfather (1940's Swing drummer) started him on drums at 10 years old. Ray picked up the guitar and harmonica in his late teens. But his heart was always in the words of the classic songs he grew up on. He writes about what he knows and he has lived in the classic Country and Blues/Rock style.
He sings his songs like someone who owns the story. Ray has had the good fortune with his band, Broke Fence, to have recorded with some great musicians such as Doug Pettibone (Lucinda Williams), John J.T. Thomas (Bruce Hornsby), Rick Shea (Dave Alvin, Rosie Perez), Bruce Watson (Rod Stewart), Chuck Kavoorus, and Brad Cobb (Tori Amos), David Chamberlain (Roy Buchanan, Manhattan Transfer). Ray's band also includes Mark Hayes (lead guitar) and Luke Hayes (drums). Swing Samurai has recorded two albums back to back: "In California Country" and "Where We Come From". Both of which are recieving extensive radio play in the United States, Europe, Asia and Australia. Ray's songs have shared the bill with such notables as: Tim Mc Graw, Bill Yates, the Bellamy Brothers and others on more than twenty radio compilations in the past two years.Ray's songs have qualified as top finalist 8 times from 2007 to 2013 in the Song of the Year contests. He won 2007 "Top 25 songs/CD" for IndieMusic.com and eleven finalist nominations for his song "Man of Steel" in 2008 through the FameGame Effigy award ceremony. Ray has a fanbase on MySpace of well over 60,000 friends and has music on 120 similar sites. And the radio stations which have played Ray's music are too numerous to list. Ray's songs have Charted high on the European and International Country Charts for the past 7 years
Ray and his band, Broke Fence are currently preparing for live shows throughout 2014.
And Ray has just released his third CD Mended Fences with 14 new songs. This makes Ray William Roldan a highly sought after Unsigned Artist for his songs and contributions to Country, Americana and Roots rock.