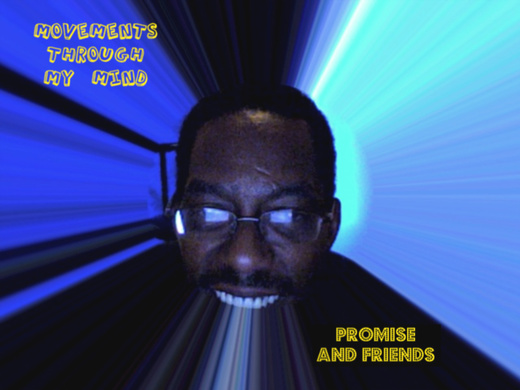 About PROMISE AND FRIENDS

I am originally from Charlotte,NC and that's where I begain my musical trip. I started out playing the lead guitar(a gift from my brother Harold S. Simpson) until my Brother Michael C. Simpson decided that I needed some help. He came to me one day and said " Hey man, you playing that doggone thang like a bass". The following X-mas he came over to our Family Home with a BASS. Maaaan, that was Santa Claus to me. Now that was when I was 13 or 14. And that was also when I met one of the most musically talented families in Charlotte. The Blacks... EDDIE, DANNY, JAMES and JOE on Old Steele Creek Rd. At any rate, a few years later this same brother(1of5) allowed me to relocate to Oakland,CA in 1979. By 1994 I was introduced to the keyboard through a brother from KC, Mo. Gene Simmons...Thanx Bro. But my ear for music I owe to my brother Victor Simpson. He would have me in the basement in Harvey, Il. and make me listen to certain elements of a song. So naturally, I give Thanks to GOD for my ability to create and produce music
I've traveled quite a bit within the USA. Currently I reside in S.A.,TX...thanks to my Brother-In-Law James "Boom Boom" Bowens(He GAVE me the money to relocate)
Here, I'm in search of fresh talen
to work with and hopefully assist in getting them launched into the big time...SPOT-LIGHT!! The reason for this desire is due to the fact that I've taken the complete course at COMIA. COMIA is a music business school, headed up by (2-time Grammy Award Winner) CHRIS LIECK. They offer one on one Instructors, in all phases of the business. My Instructor, DONATO (this is one Cool Cat yall) went the extra mile and played guitar on one of my cuts. If you are a local artist, here in SA,TX.(or abroad), you owe it to yourself to at least check out the site COMIA.US.
Just to recognize a few folks that I have had the pleasure of working,recording and sitting-in with. MEL STEWART, LJ THA PRINCE, CHAUNCEY BAILEY, LUNELL(Of KSBT-TV), JIMMY MILLER, ROBERT AND LINDA MANDOLPH, ELVIN ROWE,and so many others at the Oakland Ensemble Theater, PSYNISTER, JABALI & ASEELAH, LEE WILLIAMS, DON DICKERSON and DARRYL REED of (DBL'D' PRODUCTIONS), MICHAEL JONES, DERRICK SAUNDERS, HARRISON, RICKY FUNDERBURK, DUANE ARGEW, CACANJA RAS ZULU, KATABA, LARLUV, ARDEE, BRO. DRE of L.O.C. Ministries, LUCY and KD, FERNANDO RODRIGUEZ, MR. WILLIAM H. BROWN, OONKA SYMEON and FOX INGRAM PRODUCTIONS (which includes SLY FOX, POOPA T, SWEET CHOCHLATE, DJ COLLAGE, and many more), EARL ANDERSON, WAYNIAC, ELI BOJACK BLACKFEATHER, DANNY THOMAS (original member of the group CONFUNKSHUN), PRIMO(give the drummer some) NAVAREZ, LAQUAN CAPERS, SPOOK, (The crew from K.C.,Mo.=GENE SIMMONS,DA$H,BUBBA, STOREYTELLA,BIGBOY), RICHARD GIRON(songwrighter) & JOHN RIVERA of Trouble Twin Productions, JEFF JONES, SISTAHS'WID'GAPS, DANNY (Geechy Dan) FORD, KEVIN CORLEY AND DEM CATS ON 63rd & Dover in North Oakland CA., THE PASSIONS, CLIFTON BOATWRIGHT, JOHN BOATNER, QB WILLIAMS, AVA MILLER, STEVE PATTERSON, KALI, BOOGIE SHACK PRODUCTIONS, RIZING SUN PRODUCTIONS, RAS ANI, STEVE McCUTHEN, DASHA, AYO SHARP, TAMU, WANDA SIBIR, LARRY ROGERS, CHUNKY HARRIGAN, GYMROMPERS, FUTURE, SEAN VAUGHN SCOTT and the whole(BRG)Black Repretory Group, RABONI SELAH, GLEN PLUMMER(From the hit movie"South Central") and others to be added as I remember.
"DO TIME" jaycard was designed by Don Dickerson(Dbl"D"Productions),and
PROMISE. This effort is a direct dedication to many people... JAMES BROWN, JOE SAMPLE, THE O'JAYS, TUPAC AMARU SHAKUR, DEZI ARNAZ and Others.
Featured Artist: PRIMO NAVAREZ, DANNY THOMAS, DON DICKERSON and PROMISE.

CUTS FROM THE "DO TIME" CD:
Really Real, Somebody Hit
James, Do Time, Small Piece Of
Paper, Ballin, Sample Serving,
Promises Wave, I-85 North, If
You Know What I Mean(features
Jabali and Aseelah), Sigh Of
Relief, Gozando El Verano, No
More Tears and The Natives Are
Restless. 1999 Pinole/Oakland,
CA.

Thank You for taking the time to look at this information.