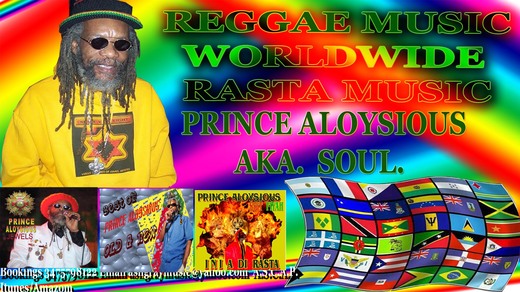 Meet the artist Lewin Aloysious Robinson, a.k.a. " Prince Aloysious ", born on November 24 on the Caribbean Island of Kingston, Jamaica W.I. As a young boy, Prince Aloysious would regularly find himself writing poetry and compiling those poems into books.

After time, the Poetic words of the young boy took on a new turn of thought which after coming together with some of his childhood brethren, they decided to start a musical group and call themselves Rags & Riches. From there, Aloysious’s day-to-day poetry writing became his fist book of songwriting lyrics; but the inspiration didn't just stop there. Aloysious’s mother, Mervis, also played a tremendous role in the development of his music. He recalls in his younger days seeing his mother reading the scriptures of the Bible,singing Zion songs that has also become dedicated practice in his own life.These song writing lyrics along with his mother's daily reading of the bible,became the back bone to Aloysious’s musical career. That is where Aloysious discovered his musical gift. Throughout his career, he has shared the stage with such artists as: Fred Locks, Dennis Brown, Freddie McGregor, Sister Carol, Judah Eskender Tafari, Shine Head, Half Pint, King Benj-I, Glen Washington,Marcia Griffiths, Luciano the Messenger and many more. Prince Aloysious has also done some radio/web interviews. Aloysious has been very careful in writing his lyrics through the inspiration of the Creator; and he has said often times,“the word take unto itself flesh and live among us”. International Venues: New Zealand, New York, Jamaica, Africa. Aloysious has become a devoted servant to the Creator and his music. Aloysious has also a member of the Twelve Tribes of Israel ; in which he has recorded with the Orthodox Music Label. Aloysious has recently teamed up with Tronic 1 Records and released an album titled, “Jewels”. Prince Aloysious has also gotten involved in some acting; he played a part in ‘Road to Zion’ with Nas, Damian Marley, and The Game. Aloysious’s goals are to bring unity and love into the hearts of those who will listen to the words of his music so that they can have a more spiritual life. Aloysious went on to work on his remix Album "Best of Prince Aloysious Old and New", released in the Fall of 2010. He has recently released his brand new album titled, "I N I a di Rasta" (Prince Aloysious Spit Fiyah 2012)with Ashgray Music. He has also written his first Children’s book titled"The Prince the Empress Pooch-chi Lue and Mr. Rat", not yet published. As Aloysious continues to gain popularity throughout the internet,he has received many positive responses from venues worldwide.