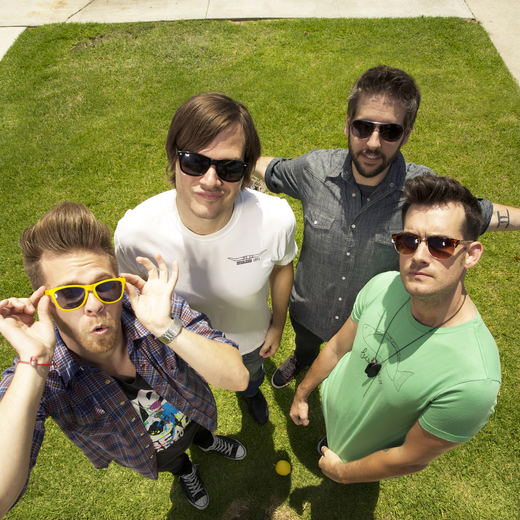 Ocelot Robot is a call to action – Drawn from the four corners of the country and forged in the white-hot furnace of West Los Angeles, Ocelot Robot sonically and visually captures the spirit of five friends enjoying the hell out of making loud, catchy, and unapologetic music together. The addictive sound of the band’s debut album Ready to Go promises to bring their distinct brand of rowdy rock to audiences everywhere.

Fronted by the incomparable Johnny Awesome (David Bowick) and layered by the futuristic hype of AP#1 (Andrew Parkman) on keys, Ocelot Robot writes crafty, infectious songs and performs as if they are offering each tune as a sacrifice. The music is fueled by the furious pulse of drummer theGR!D (Geoff Godfrey), the darting aggression of guitarist Daltron (Nate Hertweck), and the endless low-end energy of BotNasty (Marc Mutnansky). This is a band that takes the privilege of entertaining a crowd as seriously as it takes the divine duty of creating great rowdy rock.

Originally formed at Hollywood’s world-famous Record Plant Recording, Ocelot Robot members David Bowick, Geoff Godfrey and Nate Hertweck recognized a shared passion for performing in late-2008. The addition of cutting-edge professional shoe designer Andrew Parkman on synth and bass booster Marc Mutnansky completed the lineup that would write and record together for the next year and half to create a bold, passionate, and hook heavy debut album.

2010 brings the world Ready to Go, a debut album that sounds like a real band from LA should, only louder and better! The anthemic power of “Brand New Girl”, the melodic grandeur of “Go”, and the aggressive depth of “Dead Celebrity” are only the beginning of an album that is only the beginning.

Ready to Go is available everywhere and Ocelot Robot is going to be performing near you soon. This band compels you to answer the call and experience the sounds and sights of a hard working young rock band having a great time.