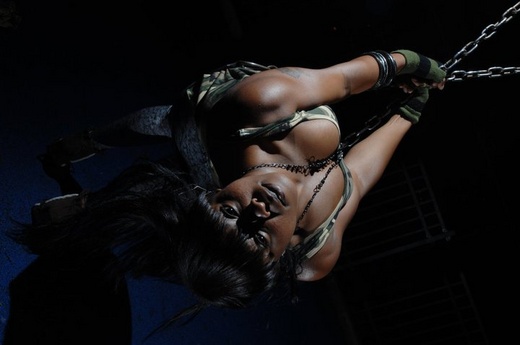 Some refer to Jersey City, NJ as "Wall Street West" because of its industrial areas. To Nina Foxx its simply home. Born Felicia Pryer, Nina Foxx grew up on the harder side of JC. Being an only child can be pleasurable for some, but for a young Felicia it had its flaws, the biggest being not having anyone to share life's ups and downs. For therapy, she started to amass her thoughts and daily life activities in a journal. This played a major role in what would later make her the H.B.I.C
At the young age of 11 years old, Felicia relocated to Florida forcing her to start over leaving Jersey City a distant memory...for now. Unaware that she was about to uncover one of the biggest pieces to her life’s puzzle, Nina adapted to her surroundings swiftly. At 13 years of age, not only did she learn to play various instruments but also how to read music, another crucial piece to her puzzle. This would teach her how to transform her daily entries in her journal into a melodic flow.

For Nina Foxx, High school was where she could showcase her talent. Instead of eating food at lunch time, Nina would get full off of the energy of her classmates who would double as her audience. It was in the cafeteria that she and a few friends would spit bars back and forth, entertaining the crowd until the bell sounded off. Her love for music also influenced her to join the varsity marching band for the Dillard High School Panthers as well. As thing were going good, December 1997 would find Nina and her family back in Jersey City. This would open her eyes to a whole new world. The daily entries in her journal would become more candid and vivid. By age 15 the streets would become Nina’s new BFF, labeling her not only a bona fide hustler but also a Gangstress
Now in her twenties Nina Foxx has accumulated knowledge from both the streets and the industry. She has taken what she’s learned from both to overcome many obstacles. Graduating at the top of her class for Audio Engineering and Production, she not only has the biggest buzz from a female artist in Jersey City which is rapidly spreading across the tri-state, but she continues to make herself relevant through not only her own music but through the music of those she mentors
Nina Foxx released her long awaited mix tape, New Breed Of Female: 16 Bars and Hooks!, which is now available on itunes.com and datpiff.com. She has been featured in the 13th issue of Grindahz Magazine www.Grindahz.com and is featured as the only female rap artist on Big 7, one of Jersey’s Elite exec’s, mixtape titled Time2Grind hosted by DJ Kay Slay, which was released in March 2011. Tune in every Wednesday, on BKS1radio.com where Nina Foxx is a co-host of the Hip Hop segment, Live in the Cipher, reviewing the latest hip hop releases as well as covering hip-hop news and related topics
For bookings, features, media, music links and audio engineering contact HBICmusic@gmail.com. follow on twitter @DAREALHBIC201.