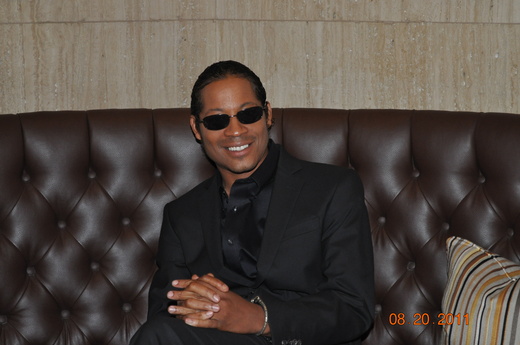 Veudal is truly the total package: a singer who emotes from his heart, a songwriter who bears his soul and a producer who taps into his vast reservoir of talent to create the kind of music that stands the test of time. His new single, "Love For The Ghetto" talks about a brother not forgetting where he came from. “That is what’s missing in music: Real life situations that you have overcome. I have nothing but love for what has made me a better man,” says the Columbus, Georgia native. Like many great artists, Veudal’s musical foundation began in the church, where he first witnessed the true impact of music and its message. He was a mere ten years old when he discovered the creative sounds of singers like Donny Hathaway and Stevie Wonder and soaked up their inspiration like a sponge. “I started singing at barbecues and family reunions," Veudal recalls. "I even joined a band when I was twelve.” The self-described "complex and colorful" Veudal worked with various bands as he continued to hone his writing and productions skills. It was not long before he caught the eye of young, up-and-coming artist, Bobby Brown. "Bobby and I were friends," says Veudal, “During that time, I was able to be an observer in the studio and I learned a lot. I spent time hanging out, but I also learned the music business first-hand and perfected my craft." Veudal’s reputation began to grow in the Georgia music community where he was known for "lacing tracks with lyrics and melody,” thus earning him the nickname 'The Brown Lacer.' Veudal’s breakout hit, the multi-platinum Dru Hill single "In My Bed," is just one example of ‘The Brown Lacer’s’ gift. He has also produced for artists like Mya and Sam Salter. His song “I Can’t Help It” (Shya) was featured on the soundtrack to the underground hit movie, "Have Plenty." says Veudal, “I am the worst music critic so I set high standards for all the songs I do whether they’re for me or for another artist. I think a song should remind others of a place and a time and have more substance to it than just being radio-friendly." This time around, Veudal is the one benefiting from his own talents. "I want to always be involved in music,” he says. “My ultimate goal is to incorporate all aspects of this business into my career: writing, producing, music publishing and, of course, singing. But for now, I'm taking one step at a time. My motto is ‘Stay in God's turn’." For Servicing, Booking and Management: tomjohnsonlive@gmail.com. You can also find him on twitter @Veudal.