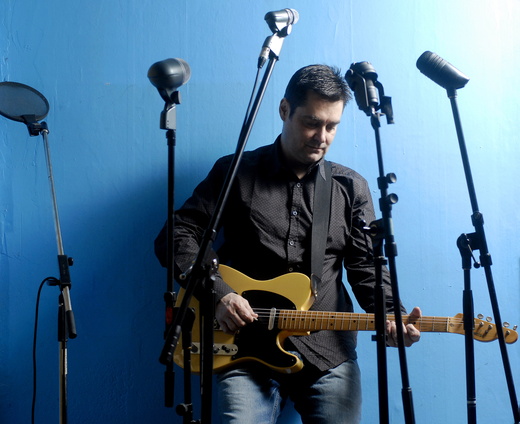 Born in 1965 in Newport, Vermont into a musical family with an English mother and a French-Canadian father, Mike Goudreau picked up his first guitar at age 14 and hasn't stopped playing since. His early influences included the Beatles, Chuck Berry, Ricky Skaggs, Johnny Cash, Nat King Cole, Louis Armstrong, Frank Sinatra, and later, Albert King, Freddie King, Stevie Ray Vaughan - to name a few. Such diverse interests help to explain why Mike is confortable in so many musical genres, especially jazz and blues.

For the past 3 years, Mike has been working on getting his many songs published for Film/TV in the U.S. And Europe. His hard work has paid off with over 650 songs signed to date and placements on such TV shows as : Everybody Hates Chris (CW), Dirty Sexy Money (ABC), Army Wives (Lifetime), The George Lopez show (TBS), Kath & Kim (NBC), America's Got Talent (FOX), Justified (FX) and Scoundrels (ABC) most notable. In 2008/2009, 31 of his songs have been part of 6 Jazz/Swing CD box sets distributed in Europe and Asia with Sony/BMG and Universal

In the early 90s Mike formed the Boppin Blues Band. Taking its name (and some of its style) from Vancouver's Powder Blues Band, the BBB blew into the Canadian music scene in 1994 with an independant CD - Sold Out - with 10 songs running the gamut from solid Chicago blues to jazz influenced 40s & 50s swing/jump/shuffle and a few country and gospel tunes thrown in for good measure. It showcases superb guitar work and vocals from Mike with a great back line of drums, bass, piano, horns and harp. Upon hearing it, Andy 'Blues Boy" Grigg of Real Blues Magazine called them one of the most talented bands in Canada.

I Dig My Job (1996) featured mostly original tunes including a couple en français, which was unique. Real Blues Magazine continued its love affair with the band rating it as one of the 5 best blues CDs in Canada that year and named them as Best Group in Eastern Canada for 1996-97. They were also nominated as Best New Artist at Canada's Maple Blues Awards in 1997. A California radio station (KKUP FM) placed I Dig My Job in the Top 25 Blues CDs for that year!

Happy Go Lucky appeared in 1999 with 9 of 13 songs originals. More accolades: Real Blues Magazine called it one of the 5 best CDs of the Year and named the Boppin Blues Band as Best Swing Band and Best Unsigned Band in Canada. It was also nominated by Maple Blues for Best Album. The following year Mike indulged his passion for his other favorite musical genre - jazz - when he released Stardust Memories (2000), a compilation of 14 classics including Route 66, The Lady is a Tramp, and Don't Get Around Much Anymore.

In 2001 Mike received a Research and Creation Grant from the Quebec Arts Council and produced Nous avions rendez-vous on the Montreal based Bros label ... 12 original blues tunes all in French! They were invited to the " Francofolies " in Montreal as well as a live recording captured by CBC's " Silence On Jazz " broadcast coast to coast.

In 2002 he recorded Thank You Louis, a tribute to the great Louis Armstrong. It was, and still is, very popular in Quebec garnering him numerous interviews with Radio-Canada, CBC Radio/TV and sell-out live shows.

My Favorite Time of the Year (2004), is a nice, personalized collection of original and classic Christmas tunes.

The Grass Ain't Greener (2006), Mike moved away from the big band style that characterized the Boppin Blues Band. The Mike Goudreau Band stripped down to guitar, drums, bass, keyboards and some great wailing harp and slide guitar from Harmonica Zeke. You get a great mix of rockin, swingin, up-tempo blues - 8 of the 12 songs are originals!

In July 2007 came '' Boppin 15 '' the new CD contains 15 cuts with 11 originals and 4 covers. Over the years some of the band members have changed but this album, as with all the previous, still boasts some of the best rhythm and brass musicians in Quebec along with some very special guests including Peter Brown on piano, Didier Dumoutier on accordian and the great Harmonica Zeke on harmonica.

Blues Et Cetera (2009), rich with 15 new original songs. The works include various styles and grooves such as reggae, singer/songwriter, rock, country and world music influences as well as Texas, Chicago, funk and swing blues for which Goudreau has been renowned for the past 17 years

Mike's 11th album: Look For The Sunshine (2010): 17 tracks featuring 12 brand new original songs and 5 jazz classics, not to mention one song in French, ''La Gentille Fille'', co-written with Michel Aubin. Whether it's a Sinatra-style crooner, groovy instrumental, dreamy bossa-nova, romantic ballad, New Orleans-style Dixieland or a finger snappin' blues, everyone from the most particular connaisseur to the jazz newbie will be enchanted with this eclectic mix of jazz

Over the past decade Mike has performed at some of the most prestigious Jazz & Blues Festivals in Eastern Canada including a record number 8 appearances at the Montreal Jazz Festival, 7 times at the Tremblant International Festival de Blues, 6 appearances at the Edmundston Jazz and Blues Festival, Fredericton's Harvest Jazz & Blues Festival, Saint John Jazz Festival and Festival by the Sea, among others. When asked why he plays both jazz and blues Mike replies: "I get bored doing just one type of music. I love jazz for its beautiful melodies, chords, and improvisation. I love blues for its energy, soul and milking its three-chord structure. I enjoy playing rock 'n roll too. But no matter what music I play it has to SWING!"

What Blues and Jazz media have to say about Mike Goudreau:

“ Well, if Mike Goudreau and his boys were looking for the sunshine with their new album, they certainly found it! Lay the sunscreen heavy ‘cause this one is a real scorcher!” Dan Behrman, Producer/Host, Espace Musique / Radio-Canada, March 2010

" I love Mike's easy going, confident approach to music. Backed by sympathetic players, that approach results in a cool effortless swing whatever the groove.He shows his 'big picture' love and understanding of the blues in his guitar playing and songwriting. I'm happy to help spread the word by playing his music on CBC Radio's Saturday Night Blues and on Galaxie. " Holger Petersen June 2009