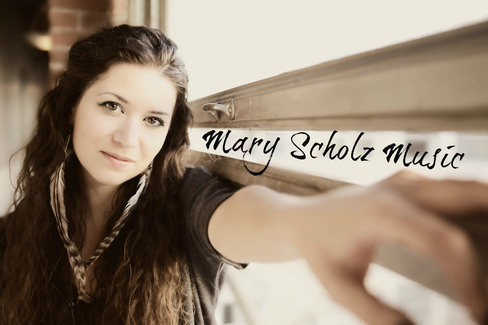 Born in Havertown, PA and currently based in Los Angeles, CA, Singer/Songwriter Mary Scholz is a triple threat talent.

Recently nominated for a 2011 Hollywood Music and Media Award as well as a 2012 Homey Award for “Best EP,” her most recent release, “Water Rising,” is making waves. (Who doesn’t like a little pun at the beginning of a bio?)

What interests people and draws them is the clear, warm, lyrical style of Mary’s voice.  Self-accompanied on guitar and piano, her voice is what she always claims as her main instrument and one she understands and owns with pride.

On the stage, Mary communicates as if she’s sitting having coffee with you – connecting with her audience with an ease that has people feeling as if they’ve known her for years and reminds everyone that there is no separation between us.  Just two people, sharing stories. And that’s exactly what her songs are. Stories of life, love, loss and hope.

Mary has spent the past six years touring the country in her Mazda 3 with nothing but a guitar and a tip jar, promoting her three independently produced and released EPs and Live Album, both at small coffee shops and large festivals.  Having shared stages along the way with artists such as Paul Doucette of Matchbox 20, David Ryan Harris (lead guitarist for John Mayer), Eric Hutchinson and Tina Shafer, Mary is enjoying her new west coast home and writing new material for her next album.  If you’re in LA you will find her performing at one of the area’s many great venues, such as the House of Blues, the Renaissance Hollywood Hotel, Harvelle’s Santa Monica and Venice’s Talking Stick.

Scholz is most frequently compared to Carole King, Sarah McLauchlin, Alison Krauss and the Indigo Girls.  In 2008 Mary kick-started her indie label and film production company, Ringlet Records. She plans to build the company to produce and promote new and talented writers, artists and screenplays.

With a degree in Theatre from The University of the Arts in Philadelphia, Mary is also an actress and can be found in a number of indie films and commercials. She is looking forward to teaming up with the Make-A-Wish Foundation of Los Angeles in 2012, along with continuing her endeavors as a writer and performer.

As a singer/songwriter, Mary's appeal is in her open and trusting performance quality, enabling the audience to not only relate to her, but to her songs and the stories they convey.

"I write about things that matter to me. Things that are close to my heart. And it's my hope that through music we can connect with one another, to better understand that we are all alike, and that no one is alone."

Also an actress, Mary's recent work can be found in the Hallmark Channel's 2012 Christmas film, "Naughty or Nice."