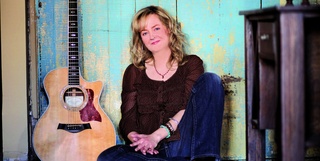 “Mary’s voice on her self-titled debut is honest, unapologetically strong and downright ROCKIN’. The writing is full of imagery as she gives us a refreshing look at magic in, “Bubbles”. “As the cities and towns are in trouble, The kids will find the magic…mixing a nickel’s worth of soap and a cup of rain”. Makes you believe in magic all over again.”
-Sweet Talk Radio, Los Angeles, CA.

“WOW!! WOW!! This is Awesome!! ‘Don’t fight to win Baby.…Fight for me.’ WOW!! That’s a single. World-class production!! Everybody, buy this CD!! There aren’t enough superlatives.”
-B. John Burns, Attorney, Des Moines, IA.

“Your song steams, I am still all worked up, the windows are fogged, and I cannot see the road. Wow!”
-Phil Hastings, Denver, CO.

“Mary McAdams should mount a national tour behind this album release – and everyone in America should be listening. This Des Moines songwriter is Des Bomb.”
-Thomas Goldman

Mary is a FINALIST in the 2010 Susanne Millsaps Snowbird Mountain Music Festival Songwriting Competition. She flies out to Utah in July to perform on the mainstage of the Festival and play "Bubbles" and "Fight For Me". Mary is a Des Moines-based singer, songwriter and educator. Her music is a mix of folk and Americana blended with the blues. Mary performed at an Official Showcase for the 2010 Sundance Film Festival and with the 2010 Access Film-Music Showcase in Park City, UT. In late 2009 she showcased at the Crossroads Entertainment Conference in Des Moines, IA. Mary is a member of ASCAP and is affiliated with BMI. Mary is a member of Nashville Songwriters Association International and has received commissions to write songs for a local organization. She is a teaching artist and teaches songwriting in the schools to grades K-8 with an emphasis on working in schools with under served populations and schools that have lost their arts programming. Mary performs solo, duo and with her band. Mary’s artistic mission includes placing her original music in television and film. Her goal's include is establishing long lasting relationships with and working closely with film makers, producers and Music Supervisors on the creative side, being a part of and contributing to their vision. Mary remains committed to building a strong and acclaimed songwriting community in Des Moines, IA. Mary received her Bachelor of Science degree from the University of Wisconsin.