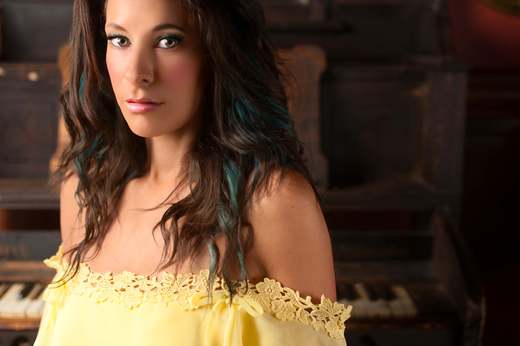 Marthia: The Many Sides of a Star

Marthia Sides has one of the most impressive voices, looks, and musical pedigrees on Music Row.

First of all, Radio’s response to her Nashville debut CD Born Again in the Country and the single “Picture Perfect Girl” has shown that Marthia has a unique sound that Country listeners get on the very first spin.

That song has a Pop/Country feel which is made for Country Radio. The follow-up single, “City Country City,” may be even more impressive. Unlike “Perfect,” Marthia wrote this one, a funky and highly autobiographical story song about her countless geographical and musical influences.

Among those musical heroes is Patsy Cline, who like Marthia is a Virginian whose music spanned Country and Pop idioms effortlessly. She grew up around Country her whole life.

What truly separates Marthia from her Row competition is not just her music and her style– which are impressive indeed– but it’s her show-biz background. She’s one of the few Country singers who’s lived the life of an Off- Broadway performer– in New York, not in downtown Nashville– and endured the Broadway auditions with 800 other top talents. Marthia has done tons of TV and film work, and is a top-notch stylist with many celebrity clients. She lived and worked in New York for 6 years before coming to Nashville. Her sister still works at a high-profile job in NYC, and together they own a Manhattan apartment. But her heart and soul have always been in the South.

Internet Radio and MySpace have become launching pads for Marthia’s music, as “Picture Perfect Girl” and “City Country City” have racked up huge numbers of plays on the Web. Marthia just finished her second CD "I Got Faith", to be released early in 2008.

She is a polished live performer who loves playing concerts. Marthia mixes in classic Country– doing several Patsy and Crystal songs, for instance– with newer and original material.

Her Radio tours have created great excitement, and spins both on small-market and major-market stations – unusual for an indy artist. KYGO/Denver, for example, a Jefferson Pilot station, jumped all over Marthia’s music and the station’s support helped her get into the prestigious Taste of Colorado festival. And in Arizona, “Picture Perfect” won a station make-it-or-break-it contest before the Eager County Festival, in a part of the state which features the largest stand of Ponderosa Pines in the world.

Everything about Marthia is new and unique, but somehow familiar too. Her combination of talents and backgrounds, so unique to Nashville, is fast making her music both a Web and a Radio favorite.