Mark's voice can be best described as "nothing but country".
While running his own trucking business, Mark blasted onto the local music scene in late 2004. By 2005 he had won his way through all of the local singing contests and was working on his first original CD.
By the end of 2006 Mark had completed his first original CD while 2 of the songs, “I Don’t Wanna Go” and “Get Er Done”, had made their way to Halifax's FX 101.9’s Top 101 of 2006.

2007 would find Mark working his day job and touring locally to promote his 1st original CD “Ger Er Done”. In June 2007 Mark sang his way past 172 people to win the title of “Judges Choice” and the honour of representing the Atlantic Provinces on CMT’s K Star Search. CMT Host- Casey Clarke was quoted as saying, “If I heard your voice coming out of a Bar in Nashville you would draw me in”
Mark made his first National television appearance on CMT on October 24, 2007.

In 2008 Mark continued to tour locally while working on more original material when he learned that he had earned a spot in the biggest Country Show to ever hit the Maritime Provinces. Mark was honoured to be the only local band chosen to play Country Rocks the Commons 2008 and he was thrilled to share the stage with artists such as Keith Urban, Gretchen Wilson, Johnny Reid, Aaron Pritchett, Jimmy Rankin, Charlie Major and Great Big Sea.

As 2010 rolled by Mark made a connection with Grammy Award Winner Gordie Sampson who penned Carrie Underwood's smash hit "Jesus Take The Wheel". Gordie invited Mark to come to Nashville and put together a brand new album and work with some of the best musicians in Nashville .The album is now finished and will be ready for distribution in early July .Keep an ear to your local country radio station this summer as Mark introduces himself to the rest of Canada with his new album titled "Just The Way You Like It". 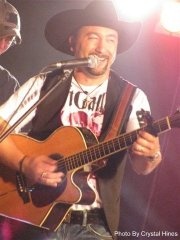