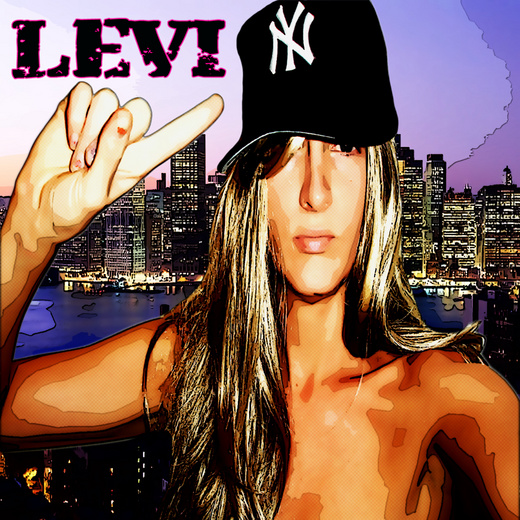 LEVI is a musical leader with her whitegirl rap & ultra high notes. She writes, records, performs, and produces on the Protools LE computer setup she invested in. and you can hear her songs played in the NBA, monthly on SHADE45 Sirius satellite radio, and on mixtapes from Cassidy & Raekwon's Dj Thoro, Bedtyme357, Stat Quo of Shady Records, Dj Green Lantern/HipHop Uncensored, Big Mike/Def Jam Shadyville, and on Shadyville v27 with Dj Noodles! LEVI has recorded, produced & released 3 albums: 'Another Jennifer' in 2004, 'LEVI 101' in 2005, and her 3rd album ‘OFFICIAL’ which will be released in 2008, with tracks from the likes of Lil’ Fame. Some of her favorite things are here in her biography; LEVI writes, records, performs, but LEVI played Suzuki violin from the age of 3 and went on to study acting and singing in her hometown of Ithaca, NY. She continued her studies at Interlochen School of the Arts, Apple Farm, Lincoln Farm, North Carolina School of the Arts summer program, and also at Roosevelt University and Columbia College in Chicago, even singing “I Want It All” when she played the part of Liz Fields in the musical “BABY”! Her acting experience includes the role of "Clytemnestra" under Ernest Perry's teachings, and an empathetic "Polly Peacham" in the Threepenny Opera. She can be heard in Good News Today, and ENERGY EXPRESS theme songs recorded in Chicago,Illinois. She can also be heard in the Chicago Children’s Museum. Radio Disney even blind tested her music on 3,000 kids & they loved it! LEVI and has had demo deals with EPIC/550/SONY and LAVA/Atlantic Records, and studies the SLS voice technique with teacher & opera star Badiene Magaziner. Currently LEVI is performing her unique stylistic blend of music for thousands of kids in community events like “STOP THE VIOLENCE, SAVE OUR CHILDREN” (TM), “MAKE MUSIC NEW YORK (TM)” and in NYC block parties! She won an Underground Music Award for Most Original Female Artist & was nominated again the following 2 years, including the 2008 UMA for Best Female Rapper! She released 2 independent albums, "ANOTHER JENNIFER" and "LEVI 101" and will be releasing her 3rd Indy cd "Official". Lookout for new mixtape appearances, shows, songs and albums from LEVI on her official website www.myspace.com/levionline.
Clothing sponsors are:
Sedgwick & Cedar ! www.sedgwickANDcedarshop.com
AND
Uncle Sam's Army Navy Outfitters
www.armynavydeals.com
* LEVI fact * She registered for & was awarded a Trademark in the categories of cds & live performances, but dropped it in return for Levi’s Jeans Company agreeing to never sue her nor claim she is infringing on their trademarks. She agrees not to write LEVI on clothing or accessories & has the right to use the name in connection with her cds & live performances in all media throughout the world, litigation free.