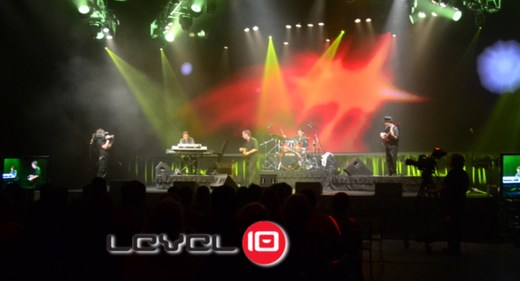 When a band can create memorable compositions, compelling melodies and deep toe tapping grooves, how would you rate them? Well the fans of Levy DeAndrade, Yovannis Roque, Rex Freligh, Nicko Pelley rate them a 10 and beyond! This dynamic group of seasoned players that make up Level 10 is living up to its name and taking it to the top with blistering live performances, an incredible international following and now a brand new CD titled Crossover. Level 10 has a large worldwide fan base and has already attracted music lovers from Asia, South America, Europe and, of course, the U.S. But fans aren’t the only ones picking up on this high-energy brand of contemporary jazz! The band was nominated by the Los Angeles Music Awards for Best New Independent Jazz Artists of the Year plus they’re semi-finalists in the Florida Grammy Awards and were voted the number one Jazz band in Tampa Bay! Level 10 also recently won second place in Billboard’s World Song Contest that drew thousands of entries.

Levy DeAndrade, Level 10’s founder and keyboardist, was born in Brazil and absorbed the music styles of his homeland when he started playing the guitar and piano at a very young age. After high school he moved to San Francisco, and quickly became part of the city’s jazz scene. He then relocated to New York and worked as a first-call studio musician for the Hit Factory where he composed, arranged and shared the stage with many amazing performers like Al Jarreau, Keiko Matsui, Kim Waters, Wayman Tisdale and many others. With a solo career in mind, Levy moved to Florida where his goal was to assemble the finest group of Jazz musicians possible. This group became Level 10.

Joining Levy on his musical mission is Cuban native Yovannis Roque, bassist, who studied at the world renowned National School of the Arts in Havana. He’s performed with many talented and Grammy Award winning artists like Gypsy Kings, Gloria Estefan, Candy Dulfer, and Cesar Camargo Mariano and has toured throughout the US, Central America and Russia.

Nicko PelleyDrumerHaving been established as a professional drummer Nicko Pelley has steadily earned a place among the most highly regarded drummers in the south east. With his stylish grooves and melodic drum rhythms he has become a sought after session drummer as well as live performer.''In the Pocket, and being versatile'' are commonly associated with Nicko while playing for such acts as: America's Got Talent and Glee Projects ''Dani shay'', Folk rock artist Christie Lenee, Chris McCarty, Indie rock groups: Drake &amp; Sofia, John Gold, Orange Hour, and Top 40's rock and dance- Save The Radio.

You can't help but get caught up in the moment when Level 10 performs live. It is pretty much impossible to sit quietly while experiencing the energy Level 10 creates with its intricate rhythms and genius melodies. The players top level professionalism in writing, arranging and rehearsing is made evident every time they step on stage.

To catch a Level 10 show live is to see the band at its apex of energy.

In 2009, when the band released their second CD titled Together - more than 1,100 fans showed up for the CD release party. What a way to start things off! The band’s new CD, Crossover recalls the energy and jam ethos as such luminary contemporary jazz bands as Spyro Gyra and the Yellowjackets. In a nod to his Brazilian roots, Levy DeAndrade selected two cover tunes. On the first, George Ben’ “Mas Que Nada,” saxophonist Freligh gets a workout before DeAndrade steps in with a rapidly-increasing keys solo. The second is “Dinorah,” a classic from Ivan Lins that Level 10 accents with funky twists.

The remaining eight songs are all originally written, composed by Levy DeAndrade and arranged by Level 10, including the first single, “Forever,” a smooth-out track featuring Freligh’s soprano sax and a snaking fretless bass solo from Roque. “Liquid” is a tune Levy DeAndrade wrote a decade ago and here freshens it up as a memorable, mid tempo tune. “Maravilha” and “First Start” both have touches of lovely bossa nova music, and Levy DeAndrade’s piano leads are a fresh and bouncy as that of the great pianist David Benoit, who has been known to throw out a few bossa nova tunes himself. Of course, if you’re looking for straight-up funky jazz, you’ll find that here as well, on the cover tune and on “Soup for Thought.”

“It’s hard to pin down Level 10’s musical style, and that’s a good thing. There are some engaging smooth-jazz leanings, but on Crossover you’ll get plenty of muscular funk, Latin, contemporary jazz and Brazilian-style music, the latter inspired by leader Levy DeAndrade’s native country. This highly professional band, which has fans worldwide, is sure to expand its fan base with a CD that will certainly rank among the top released in 2011.” - Brian Soergel, JazzTimes

“I seriously doubt my Brazilian pop jazz sensibilities will ever be the same. Level 10 is like Fourplay on party steroids, mixing the deep jazz chops of that more famous group with danceable grooves, powerhouse melodies and urgent emotional energy that doesn’t quit for a minute on their genre-transcending third album Crossover.  It’s filled with so many buoyant pleasures it’s hard to know where to stop the praise.  If this is Level 10, I can’t wait to see them at the next level of their career!” – Jonathan Widran, Jazziz, Wine and Jazz Magazine

“It was a huge pleasure having you guys over here. The caliber of music you brought to the festival was simply stunning. One of the best live gigs I’ve ever seen. You’re that good. To have 300 punters in Lancaster dancing and screaming for more just goes to show that your band puts all the right superlatives back into jazz.” – Benjamin Ruth, Founder CME Artist Services, UK

“My personal highlight of the whole Lancaster Festival, though I must declare an interest in funky, Cuban, Brazilian and American modern jazz played at Grammy nominated level and Level 10 are just that. Their performance at a packed Dalton Rooms on the Sunday evening, one of the last show of the festival was, for me, as good as it gets. These guys are the undisputed masters of their respective instruments and the dexterity and ferocity with which they play together on Levy’s complex yet highly rhythmic compositions is the key to the response this band received. Not only was the dance floor packed but the band received that most positive of audience feedback: the audience’s approval after songs was so loud that the mics on stage started to pick it up and feed the jubilant roar back into the PA. This is, as far as I know, something new for Lancaster. It happened with Level 10 on Sunday, October 10th, 2010. May it happen here again and soon!” – CNE Artist, UK