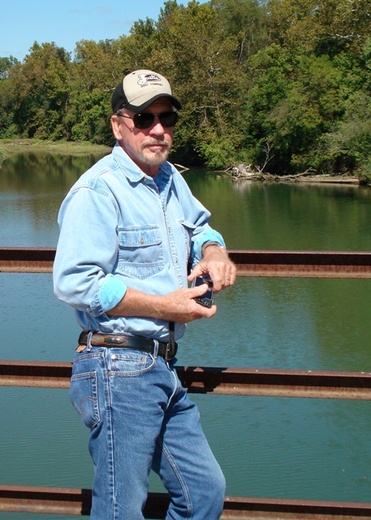 I remember when I was about 5 listening to the Grand Ole Opry on the Radio and the local station there in Springfield Mo. With entertainers like Slim Pickins, Little Jimmy Dickens, and Minnie Pearl. One day my uncle brought his new Gibson Guitar over and I was hooked. I began singing songs like Shot Gun Boogie, and Open the Door Richard when I was about 6 or 7 for my Grandparents and anyone else that would listen. I got a Sears Silver tone F hole guitar when I was about 12 and learned 3 cords my mom and I took it to school to play for the kids, some one bumped into it and it fell and broke the neck. But I kept plinking away even though it was almost useless; finally I got a Sears Silver tone Electric from a friend who couldn’t make the payments. Of course I liked Rock and Roll and I would play for anyone who would listen. A couple friends and I would get together and try to out do each other singing and playing Johnny Cash, Little Richard, Chuck Berry, Ray Charles, Bill Haley, and any thing country that we liked. I played at parties and places out in the country when some one got enough money for a Keg of Beer or a six pack. Some times I would just get together with a friend or two and try to learn something new and try to harmonize with each other.My Wife and I got married when I was 20 and she was 18, we had two kids a girl and a boy, so the Guitar was in and out of the closet till I retired, then I found a place to Jam with other people playing mostly country and the fire got started again. Now it takes almost all my time and then some. I still like country and anything that strikes my fancy from blues to swing tunes of the forties. I guess I just like music if it’s good and most of it is. I have Five CD’s out and I’m working on another one. I have played at Fairs, VFWs, Churchs, Festivals, Funerals, Parties, Hamburger Joints, Pizza Shops, Coffee Shops and any place they want me. My influences were George Jones, Brooks Benton, Vern Gosdin, Merle Haggard, Bobby Darin, Allen Jackson, George Strait, etc. I have always been good with my hands I built my own house, built guitars and repaired them. I spend a lot of time on the computer recording or looking up songs  I’m always looking for more, and more places to play them………..Larry Dean