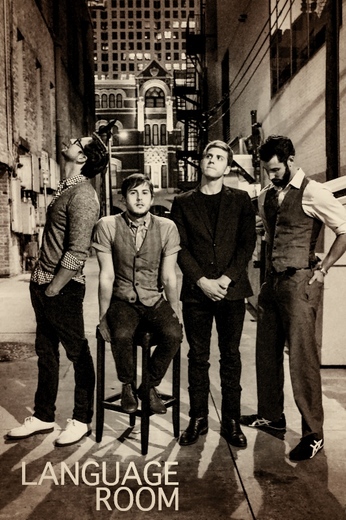 Relocating from Los Angeles to Austin in search of new direction, Todd Sapio literally bumped into his old friend Scott Graham in the heat of a 6th street night. Scott had also just moved to Austin annoyed by the LA music scene. So, the two West coast refugees began writing together. Conveniently, Scott had a brother who also shared a passion for creating music. Matt Graham was introduced into the band shortly after the first few rehearsals. Two nights before an important gig, the band's drummer vanished and was never heard from again. Coincidence; we think not. Instead of canceling the show, the band frantically searched for anyone to cover for the lost appendage. Caleb Kelly did more than just cover he filled the final void in the band's lineup. Another new-comer to Austin, Caleb also felt called to make music, so like many before him, he made the trip to the music Mecca and fell right into place with Todd, Scott, and Matt.
Formed in September of 2007, the newly formed Language Room began playing shows for tens and tens of people. After winning a battle of the bands competition, the band immediately used the money to record an EP with friend Derek Jones from LA. From that session, "Make Me Choose" became the intro song for Livestrong.com and "Don't Cover Your Eyes" was used in the movie "The Beacon." Unsure of the next step, Todd met Matt Noveskey, bassist for Blue October, at a local music store. After hearing the EP, Noveskey jumped on board as producer and in November 2008 Language Room and Noveskey began recording songs for the band's debut, "One By One." With honest lyrics and passionate performances Language Room is turning heads and hearts everywhere.