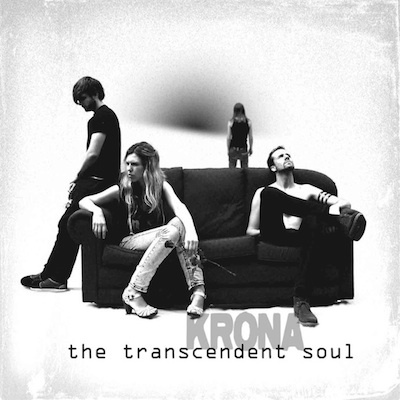 Throughout the history of rock music, bands have all too often relied on only one USP to satisfy the demands of their listeners; be it an incendiary guitarist, a prodigious drummer or a roof-raising front man, so many groups settle for just one main attraction, while the other members simply drift along in the background. If there’s one band that can be described as so much more than a sum of its parts, it’s Krona.

Supplying the pounding rhythm section upon which Krona’s songs lie upon is drummer Josh Pow, whose deft fills and hip-hop influenced beats support Anthony Channer’s melodious bass-lines, adding an element of funk to Krona’s heavy rock and roll. Artur Alexjeves’s prodigious guitar skills are demonstrated on every single Krona song, with innovative effects layered upon the hook-heavy riffs, showing off an elegant interplay with the other instruments. All of this provides the perfect counterpoint for frontwoman Nelda Kuzuma’s delicately powerful performances, whose honey-barbed vocals sound as if they have been borrowed from the Heavens, or, on occasion, stolen from Hell.

With the release of the band’s second studio album, ‘The Slave Sessions’, Krona’s sonic visions have been pushed forward, with new experimentations into just how far they can contort melody and marry genres, all the while still sounding accessible to newcomers whilst retaining the raw edge that attracted fans to their debut. When you hear Krona’s music, you will begin to understand that this is a band that could not survive without each other and, once their music has hooked you, you will not be able to survive without them.