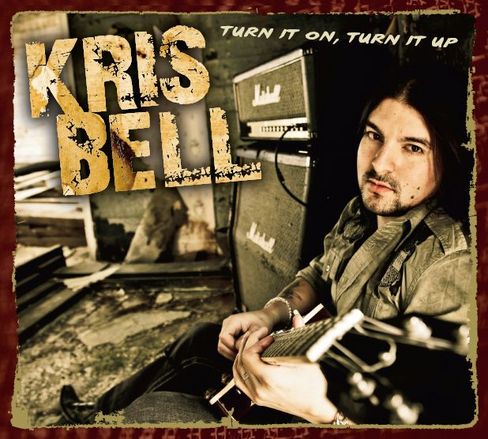 With the release of his new album, ‘Turn it On, Turn it Up’,

Guitarist/Singer/Songwriter-Kris Bell is bringing his “American Rock” sound out loud and clear.  His dynamic range of high-octane Rock anthems and heart wrenching power ballads brings the listener along with passionate storytelling wrapped in strong, melodic hooks and powerful guitar driven grooves.  He tops his songs off with fiery guitar solos reminiscent of the legends, but with his own signature flare of smooth and bluesy cries capped with intense and ferocious jamming.

Born and raised in San Diego, CA, Kris began playing guitar at age seven and wrote his first song at thirteen.  He grew up playing in the Southern California music scene until 2005 when he made the move to Nashville, TN.  There, he was quickly hired as the Lead Guitarist for American Idol star Bo Bice.  For the next two years, Kris performed on numerous national TV programs, toured the country, recorded on a major label album and was featured in a number one music video on MTV and VH1.

In 2007, Kris began pursuing a solo career, bringing his “American Rock” style to new fans from Georgia to California and building a dedicated following throughout the country.  With his name on the rise, he has shared the stage with some of rock’s greatest acts and current stars including Lynyrd Skynyrd, Blackfoot, Hank Williams Jr., and 3 Doors Down.

This year, Kris continues moving to new heights with his solo career. He signed a deal with MTV for music placement in over twelve of their current programs and most recently, was nominated for Four Music City Mayhem Awards, including Best Male Vocal, Best Song (“Livin’ for Tomorrow”), Best Live Show, and was won the award for “Best Rock Guitarist”. Dream Row Entertainment hails him as “A Genuine Rock Talent” and Nashville Rock has named The Kris Bell Band their “2010 Band of the Year”.

Kris’ bold mix of Modern, Alternative, and Southern Rock creates his “American Rock” style with a sweet blend of inspiration from timeless rock bands of the past and a distinct, innovative, and electrifying approach to today’s rock music.  Experience the music of Kris Bell and the sound of today’s  “New” American Rock Artist.