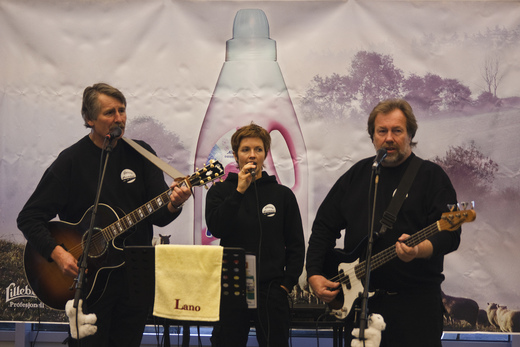 About Knife River Cowboys & girl
Knife River Cowboys started out in 2001 by the campfire at the Knife River Ranch in Golden Valley, ND. Being from Norway, and getting a massive support from a bunch of howling coyotes during their campfire-singing, made them wanting to be cowboys. There are no cowboys in Norway you can argue. There are now, they will answere. We can be what we want, at least pretend.
The two members of the band, sometimes called Lewis & Clark, are childhood friends from Oslo in Norway. Their musical relationship goes back to the 1960’ies, listening to the Beatles and imagined playing in a band by using tennis rackets. Two worn out cowboys was in the need of somebody to make their sound even better, and also make the group "shine" a little more while performing. The result is a female member of the group. Her name is Hanne Cecilie Vestøl, and she has a crystal clear beautiful voice and a look of a modell. The groups latest achievement outside Knife River Cowboys is the production of GT-Sara’s first CD, together with two members of tidalwoe. The CD "GT-Sara på farten med Full Rulle" stayed 11 weeks in the National Charts and topped the Charts in the radio program Norsktoppen. Knife River Cowboys are now working to finish their first album and hopefully release it in 2009.