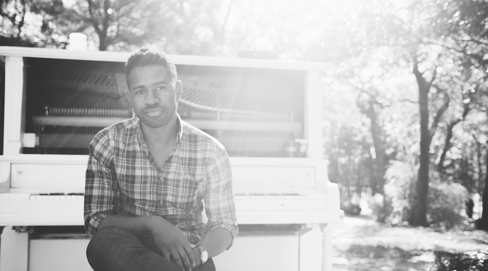 “We’re putting legs on good music and good writing again.  I think we are bringing a timeless quality back to popular music for our generation because right now our generation is swimming in a sea of music that goes by the wind. ” – Kirk Thurmond

Kirk Thurmond wants to take you on a ride to remind you why music means so much to people. He wants to give you music, that years from now, will still mean something to you.  It captures you as you hear it and does not let go.

For Kirk, music has always been life giving. Singing a cappella in church as a child, he developed a sensitive ear.  He and his brothers learned about tight harmony from his father, and his mother introduced him to the soul giants of the 60’s and 70’s. At age 12, Kirk borrowed a friend’s guitar for a weekend, but returned it a year later. He’s since gone on to share the stage with the likes of Ernie Halter, Green River Ordinance, Mint Condition, and more.

Kirk jumped on the scene with his first album, Born in the City, as a straightforward acoustic-styled singer songwriter.  While initially desiring to craft pop music for a more discerning audience, Kirk has returned to the sounds of timeless music from years past – music that reflects community, the lives we live, and the struggles we all face.

After finishing Born in the City, Kirk reentered the studio with a new perspective and the goal of taking his music to the next level.  “I have grown, content wise, from the last record by being more intent on what I write instead of just writing something that sounds good.  I wanted to dive deeper into soul and move away from pure pop. I started listening to Stevie Wonder again, more Otis Redding, more Bill Withers.  Really simple writing with formulas that just worked. You’ll be able to hear a lot of that in this record.”

Only Love is about just that, LOVE. “I wanted to make music about the one thing that I know for sure changes lives. Songs like “There for me” and “Change of Heart” get right to the point of trust and compromise, but not without giving you a vivid front seat to Kirk’s musical upbringing. The title track “Only Love” and the heavy hitting “Matter of Time” are perfect examples of how Kirk mixes the soul of his roots with current pop sounds to create something fresh and timeless. This album is filled with real words meant to make a real impact: “I wanna wear what I believe on my shoulders/ want you to see it when I’m walking around/ these words could be all that we need/ if I can show you what they’re all about.”

Kirk has spent countless hours over the past 18 months making sure his music and his message are on point.  With a gift of playing by ear, Kirk spent this time touring nationwide playing acoustic guitar for other artists, and he was featured on the national TV series Troubador, TX. Now focusing on a solo career, Kirk wants to help steer the music of this generation back to what it should be – creative, real, and moving.

His debut EP, Born in the City, and the newly released LP, Only Love, are both availible on iTunes.