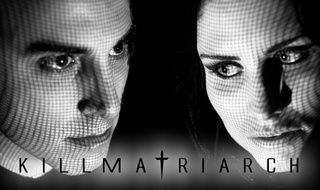 Electro-Industrial, Visceral, Raw, Visual, Dark, Seductive. KillMatriarch was formed in the spring of 2010 by Matriarch and OnTronik (Co-Founder of System of a Down and The Apex Theory). The duo have caught the attention of devoted fans globally with the steady release of songs from their debut EP ::Order through Chaos::. MTV, FUSE.TV, AOL and more have featured KillMatriarch’s music. They have received front page features on PureVolume, Buzznet, AbsolutePunk and VampireFreaks. KillMatriarch fans have positively compared the overall style and energy of the band to such inventive groups as Nine Inch Nails and The Prodigy. The band has received industry buzz as well as being featured on the A&R website DailyUnsigned.com. The music is just one aspect of their vision as they consistently release “visual propaganda” and various other art forms to showcase their creative skills and message.

The band’s free debut EP ::Order through Chaos:: and tour dates are now available at KillMatriarch.com